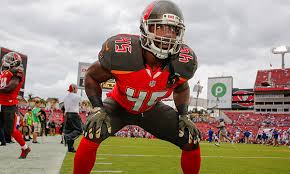 Kwon Alexander will be out the remaining, four games of the regular season. With backup linebackers now starting, in the place of Kwon Alexander, Tampa has to backup the backups. Re-enter: Orie Lemon.

“The Tampa Bay Buccaneers re-signed linebacker Orie Lemon on Wednesday, the third time the Houston native has been with the Bucs this season. But that has been the story of his NFL life. The Bucs signed him from the Chiefs’ practice squad in 2014 and he played 10 games that season, with three starts. This year he has played in six games, all on special teams, with the Bucs.” – Report by Rick Brown