With the 197th overall pick, Tampa Bay selected fullback Dan Vitale out of North Western. Due to an unfortunate injury to last year’s fullback, the Buccaneers were left without one on the roster, and Dirk Koetter believes Vitale could play a hybrid role on the offense.

Dan Vitale played four years with the NW Wildcats, and was a combination of fullback, halfback, and tightened. His senior year he led the University in receiving yards, receptions, and in receiving touchdowns, thus becoming a high point in what was considered a bleak offense. Vitale earned himself Second-Team All-Big Ten honors, in 2015, for his role at the tight end position. He has soft hands, and is a solid route runner, but is very capable with the run/pass block.

During the combine, Vitale’s performance was nearly at the top of all running back and fullback categories. He boasts a 40-inch vertical and runs a 4.6 in the 40. He is a welcome talent and could become an instant playmaker that could be reminiscent of another fullback/halfback hybrid, Tampa knows all too well. However, those are some mighty big shoes to fill. 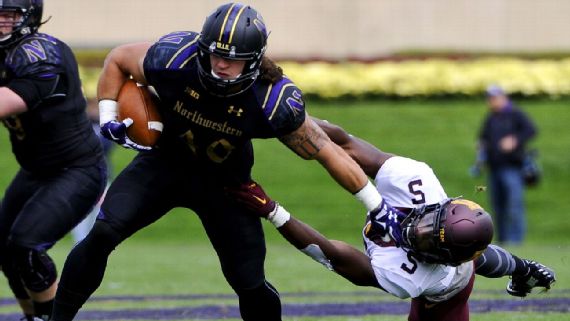