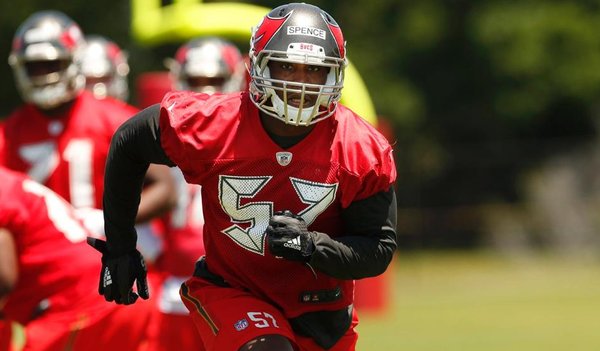 Calling Noah Spence the best pure pass rusher in the draft, Mike Smith seems more than pleased that Tampa took a chance on him. Mike Smith raved about Spence, on Thursday, saying that he has been very impressed with the intelligence Spence is showing, and how he is able to handle everything that has been thrown at him.”We’ve put about 70-percent of our defense in, just to see what these guys can handle. The philosophy is to throw it all at ‘em and see what they come back with and then reconstruct it from there. I’ve been very impressed with his football intelligence, both in the rookie minicamp and what he’s done this week. We’ve thrown a lot at him over the last seven or eight days.”

Smith has big plans for Spence, as flexibility will play a large role in Tampa’s defensive scheme this season. “Flexibility is the thing that’s most important for us, and when you start talking about the schemes that we’re talking about using he’s going to have the ability to line up on both sides of the ball.”

GM Jason Licht has stated he would like to see Spence play only defensive end, however, the Buccaneer linebackers coach has suggested that he may play a little, in the linebacker’s position. The ability to move him anywhere and rotate him around is not far fetched at all, as many scouts had him pegged as a perfect fit for a 4-3 defensive end, or a 3-4 rushing linebacker Maybe, we could seem him lined up on the line as a defensive tackle.

Not only is Spence athletically gifted, he has the smarts to go along with that athleticism and leads me to believe that the Buccaneers may have just hit a grand slam, drafting him.