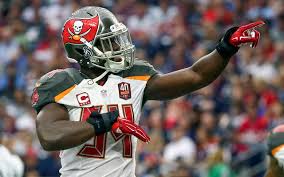 The Buccaneers did a lot over the offseason to beef up the defense. They added some key new players and added some key new coaches. Now, Lavonte David has extremely high hopes for the defense this year. “I think we can be the best defense ever, to be honest. I’m going to go out there and say it.

That’s some pretty big shoes to fill. If you remember, the 2002 Buccaneers defense, you know, the one that made Super Bowl history, only allowed 12 points a game. But Lavonte David is standing by his feelings about the dominance that is to come. “Yeah, I’m going to say it. Put it on me. I’m going to say it. NFL history, Bucs history, anything. That’s just the type of attitude we have.”

The Bucs did improve in defense last season but still placed 26th in overall points allowed. The secondary and pass rush being the biggest issues, last season, have been addressed this offseason, with the additions of Hargreaves, Grimes, Ayers, and Noah Spence. Hopefully, we improve to a high level of defensive play, but to claim the best ever, is a bit much this early.