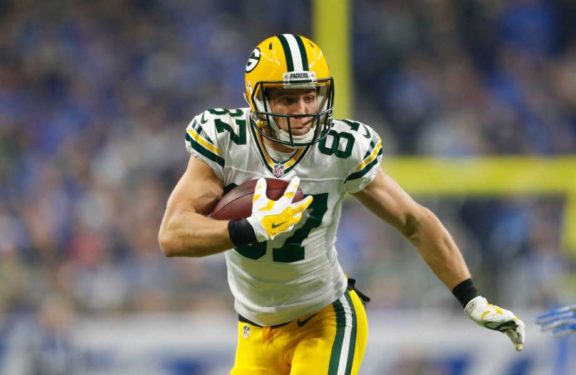 The Green Bay Packers released long time wide receiver, Jordy Nelson. We have grown accustomed to watching the dynamic duo of Aaron Rodgers and Jordy Nelson. Unfortunately, the Packers have seen the injuries pile up on Nelson over his career. The emergence of Davante Adams, Geronimo Allison, and the recent signing of Jimmy Graham has spelled the end of an era in Green Bay.

Jordy Nelson, 32, will be entering his 10th season in the NFL. During his career Nelson has scored 69 touchdowns and compiled over 7,800 yards.  In 2017, Nelson saw his worst statistical year since entering the NFL in 2008. He was only able to find the end zone 6 times with 482 yards. The downfall in numbers is most likely due to Aaron Rodgers being injured and Nelson having to find continuity with Brett Hundley. Could it be possible that Nelson jumps from one bay to another? Tampa Bay could definitely use another veteran receiver with the pedigree that Nelson posses.

Most Tampa fans are going to be up in arms because Nelson is 32 years old and we have  Chris Godwin, but I personally would love to see Nelson in pewter. He could really take Jameis Winston’s career to the next level. The weapons surrounding Winston could be Evans, Jackson, Nelson, Brate, and O.J. Howard. That would be scary for opposing defenses. The only way that Tampa Bay makes a play on Nelson would be is if he took a low-risk contract. One thing is for sure Nelson can still play at a high level, but where his talents will be next is undetermined.