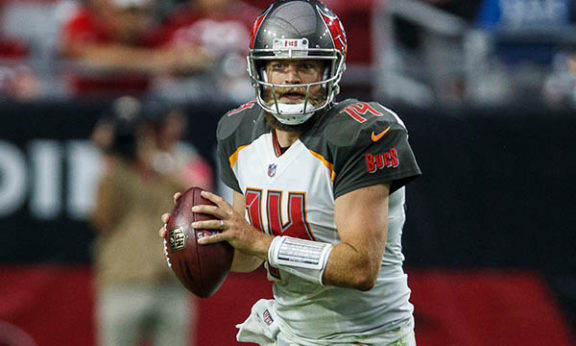 As I sit here and write this, I have a number of emotions. I never thought after we drafted Jameis Winston (Although, not surprised) that I would be writing an article about a backup quarterback taking the helm.

It’s clearly no secret that Winston has a lot of baggage that needs to be handled, worked through, and dealt with. We are forgetting through this mess, there is still a season to be played, and someone will have to play QB for the time being (Still no word at this point officially how many games Jameis will miss).

Which brings me to Ryan Fitzpatrick. Fitz came into last season in 3 games and finished 2-1 as the starter. His ability to extend plays is still there, and I would even go as far as to say he is more accurate on the deep throw than Winston.

What fans seem to forget through all of this mess, is that we have seen upgrades at a number of positions to complement Fitzpatrick. Ryan Jansen is one of those. I would also include the defensive upgrades as well through free agency and the draft. Lastly, we have weapons offensively as well that would take pressure off of Fitz having to make a ton of throws. Mike Evans, DeSean Jackson, Chris Godwin, Cameron Brate, OJ Howard (My sleeper pick on offense who I believe will have an awesome year), and the new kid Ronald Jones III. There is talent on both sides, but Fitz is the leader we have to depend on now to get us to the next level.

It may be tougher without number 3 behind center, but I am not saying by any means that this season has been a wash just yet. Remember, Fitzpatrick a few years back led a team who had no chance, to within a game of the playoffs. Why not us? It could happen.