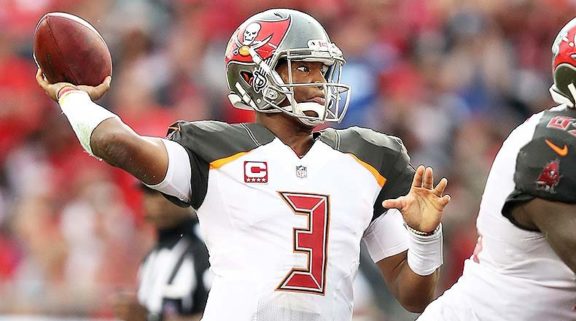 With the first day of camp in the past, one thing still remained lingering around the Buccaneers, and that’s Winston’s 3 game suspension. Since the news broke that the players haven’t had a chance to speak publicly about the suspension or the situation, the team had to answer some difficult questions, regarding their franchise quarterback. Winston is scheduled to talk publicly to the media today at camp.

When David was asked what he had thought about Winston’s violation and suspension he stated, “Is was a silly mistake.” Considering that some fans and journalist still hold his sexual assault accusation, from FSU, (Investigated- Never charged), over his head.

Now that Winston is engaged to his fiancé Breion Allen and has a newborn son, David is 100 percent certain that Winston has learned from this mistake he made two years ago.

Reporters have reached out to Marpet and he was surprised about the suspension and that he had learned about the incident from Winston personally, prior to it hitting the news. Winston also had conversations with the team, individually, to better prepare them for what’s about to come up. Winston has not addressed the team as a whole unit, yet.

Mike Evans only had high praises for Winston and stated, “That’s my boy!” and that they have been going to war together for ,3 going on 4, years now. Evans has two young daughters of his own and the situation with Winston has been hard on him. Evans went on to say that he doesn’t know what exactly happened that night and will not speak about it, because he wasn’t there. Only the people, who was directly involved, can answer those questions.