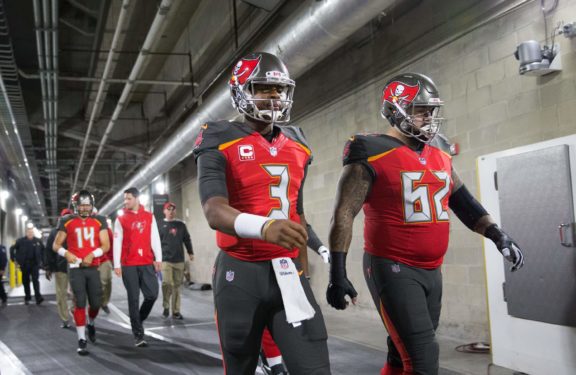 Almost everyone is counting the Bucs as bottom feeders before the season even begins. From the Las Vegas oddsmakers makers to the Bleacher Report, they all are predicting an abysmal season for Tampa Bay. This time last season, the Bucs were the chatter of the NFL, especially with their premiere on Hard Knocks, and many were expecting them to make the playoffs. They fell way short of that expectation, and now analysts are buying low on the Bucs.

The Bleacher Report and NFL Spin Zone, ranked the Bucs 31 and 32 respectively. The oddsmakers in Vegas, who make Super Bowl odds for the league every year, give Tampa Bay  a 66/1 chance to win it all. That is the third worst odds in the league. Why does there seem to be such a lack of faith in the Buccaneers? Is it because of the Winston suspension? Lack of faith in our defense, running backs, or coach staff? Or are they just simply being more conservative after having so much optimism for the Bucs, last year, only to get burned?

The answer seems to be a mixture of everything. Randy Gurzi, from the NFL Spin Zone ranked the Bucs dead last, saying, ”They have a strong need at the running back position and there wasn’t a whole lot about what Ronald Jones did in his debut to ease those concerns… Beyond that, there are concerns under center. The Bucs will have to turn to Ryan Fitzpatrick to start the season as Jameis Winston is suspended for three games.” (You can read the full article HERE ).

The Bucs were underwhelming this past season and it is fair to be cautious this season, but I simply cannot comprehend how the Bucs seem to bring up the rear across the board. Teams like the Jets, Dolphins, Bills, Redskins, Browns, and Cardinals are just a few examples of teams that, in my opinion, are not as well equipped to succeed as the Bucs are this season. There is just simply too much top-shelf talent to not give way to a good season, sooner rather than later.

This team is much improved vs last season in almost every area of the game. Even when you consider the Winston suspension setback, I still believe the Bucs are a decent second tier team. My final take? The Bucs are being under-sold and will surprise many people this season.