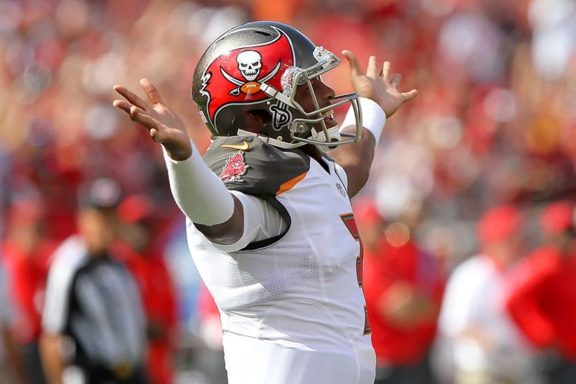 Ryan Fitzpatrick, starting for the previously suspended Jameis Winston, has led this team offensively for the past three weeks. 2-1 is a record that most analysts didn’t see coming. Last night Fitz threw three interceptions, but he also threw for over 400 yards again. So what do the Buccaneers do from here?

Is it smart to take out the QB who has led you to first place in the division and brought your offense to the spotlight? My guess would be not at all. The Bucs have stated that Jameis (barring any more issues off the field) is their franchise QB, but Fitzpatrick has performed well and has at least made the argument for who should be under center interesting.

Jameis Winston is an awesome talent. He makes and extends plays that most other quarterbacks have no chance in. Winston also hasn’t seen football action since the pre-season outside of workouts with former NFL players and coaches. I say we should see what happens this Sunday before any decisions are made. The job, in my opinion, is Fitz’ to lose. If he comes out and throws interceptions in the first half, whether it’s his fault or not, expect to see number 3 back quicker than expected.