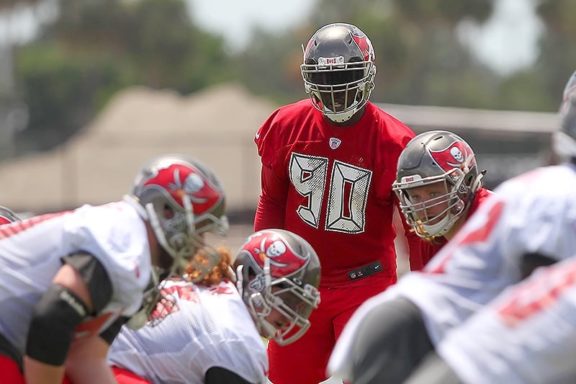 On Sunday the Falcons are concerned about one thing: how will LT Jake Mathews and the rest of the Falcons O-Line must try to slow down Jason Pierre Paul’s collection of sacks in 2018.

After 4 games JPP already has 4 sacks, at times being completely unblockable. Not only has he been an excellent pass rusher, but he has also been solid against the run with 17 tackles and 1 FF. Six of those tackles came last Sunday against the Bears. JPP is without a doubt the best edge rusher this team has had since losing Simeon Rice in 2007.

The Falcons know JPP is a freak athletically. At 6’5” and 280 pounds, he is not only strong but incredibly quick. Falcons QB Matt Ryan cannot be thrilled to be going up against both JPP and Gerald McCoy in the same game. Bucs fans should watch JPP closely on Sunday as he plays big in big games.

Evan Winter - June 16, 2021
0
The Bucs offense proved itself to be one of the best and most effective units in the league last year. While it was a...

J.T. - June 15, 2021
0
The Buccaneers are a franchise that has always been known for defense. It has only been recently that they have begun to emerge as...

Bucs Report Staff - June 14, 2021
0
Early on Monday, EA Sports released a trailer teasing who will be on the cover of this year's Madden NFL video game. The teaser...

Ray Kennedy - June 14, 2021
0
In what will amount to the best thing Buccaneers fans will ready today. Maybe all week for that matter. With Monday Morning in America’s...

Bucs Report Staff - June 13, 2021
0
The Tampa Bay Buccaneers haven't exactly had great success drafting at the quarterback position. The list is long and arduous to say the least....
Load more