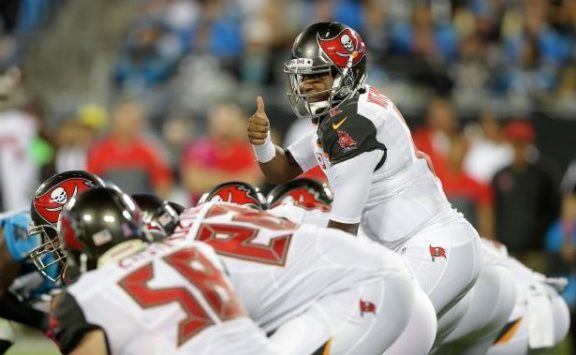 There truly may not be a more telling statistic for success in the NFL than the giveaway/takeaway.  I admit, when it comes to Jameis Winston and his turnovers, there is usually no defense—as in, no Buccaneers’ defense.  I wonder if I would even recognize a Tampa Bay defense if I saw one.

Trying to analyze Jameis’ first four years as a Buccaneer seems to be a running observation. What would the observation be with a consistent running game?

The interception Winston threw into double coverage yesterday trying to complete a pass to DeSean Jackson hurt like heck.  Every turnover hurts like that.  But when there is a lack of a consistent running game or the team is playing catch-up for lack of defensive support, there are going to be chances taken and bad decisions made, and turnovers will probably occur.  One of the things you will hear every defensive coach say is, “Get them out of their game plan.” Reason: see previous sentence.

Jameis Winston started to show offensive brilliance all the way back in high school, not just excelling and leading his high school team to a state championship, but actually serving as his high school team’s offensive coordinator.  He is a gunslinger, a “put the team on his back and let’s go” kind of teammate.  Do I wish we had the dominant defense and overpowering running game that Jameis had at Florida State? Well, yeah!  Do I know if our defense is going to start showing up consistently or if the running game is going to start holding up their end of the bargain? Well, no I don’t. But do I like having the skills, competitiveness, and leadership that Jameis Winston brings to our team, especially in light of other deficiencies? Yes, I do.

Bucs Report Staff - January 14, 2021
0
Leonard Founette seems to be happy in Tampa. According to Greg Auman of The Athletic, Fournette loves the unity he has found on the...
Load more