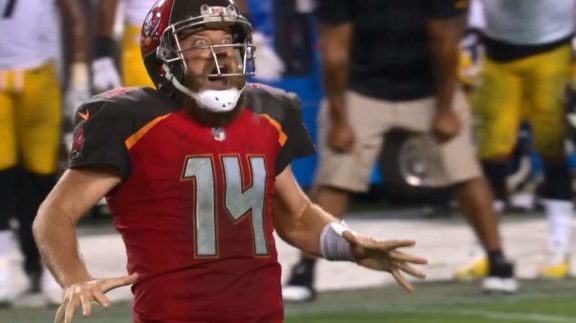 I know what you’re thinking. “Playoffs? Are you kidding me?” (Insert Jim Mora meme.) But I am not kidding you.

As far-fetched as it seems, the Buccaneers do have a chance at making the playoffs. A win on Sunday would just be the beginning.

The Buccaneers have only lost one divisional game, but they have only played two divisional teams. Having lost to only one other NFC team, the Buccaneers are in a prime position to win games and make the playoffs for the first time since 2007. Jon Gruden was the head coach, Jeff Garcia was at the helm, and the Bucs lost to the Giants in the wild card.

Tampa has a tough playoff run ahead of them as they play eight NFC teams in the nine remaining games, meaning they must win at least five of them. I believe 8-8 gets the Buccaneers in. The schedule has some very winnable games ahead, especially the 49ers and the Giants, but that’s only two of the five games needed to reach eight wins.

A setback for Tampa will be their own division. The Saints lead the division 6-1, but that one loss came from Tampa. The Panthers are in second place, and we have not played them this season, so there is no margin for error. We must beat them Sunday. The Falcons are tied with Tampa at 3-4, but they beat Tampa, so they are ahead. We must beat them at home.

With the remaining schedule looking favorable for the Bucs to make a push for a wild card, many factors can cause the Buccaneers to miss the playoffs this year. The health of the team and the consistency of play are going to be key factors. Beating the Redskins could also factor into the equation nicely and beating the Ravens would be nice as well. Sadly, the loss to the Bears could rear its ugly head in the end.

But none of this even matters if we do not start a winning streak in Carolina this Sunday.