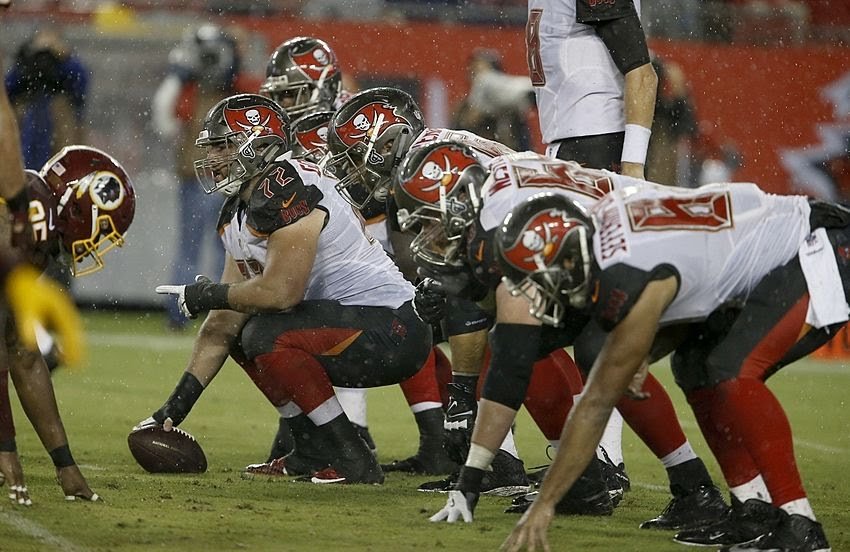 The starting five on the offensive line have not been all that bad but there are concerns in some areas. The one change from last season to this season is that Alex Cappa is starting at right guard and not Caleb Benenoch.

It’s still preseason and a lot of these issues can be ironed out but most players on this line aren’t young and have played in several NFL games already.

Here’s the good and the bad.

Demar Dotson played solidly until the Bucs played the Cleveland Browns. Ryan Griffin took a sack as Dotson was walked back into him. He is one of the team’s most consistent linemen and will play well in games. There will be times when Dotson gets beat and take a holding penalty and save a turnover from a strip-sack. Overall, Dotson should play well in what I think will be his final year in a Tampa Bay Buccaneers uniform.

Where should I start with Donovan Smith? He has the potential to be a great offensive tackle in this league because he is paid like one. I want Smith to have better footwork, more attitude, and drive someone into the ground as the play is ending. He needs to set the tone on this offensive line. Smith has been seen missing blocks in the Dolphins’ game and getting put on his backside from linebackers.

I am going to be critical of Smith’s play this year because he plays an important role in the success of this offense. Now, let me give credit when credit is due; he played well after the initial embarrassment Myles Garrett gave him in the opening drive against the Browns. He has played decently in most of the preseason games. I want to see Smith turn a page this season and be the left tackle everyone knows he can be.

One of the more consistent players on this offensive line thus far is Ali Marpet. He has outplayed his expectations of where he played college football. The one area I would like to see more improvement from Marpet is getting to the next level on blocks and creating space for the backs to bust open big runs. I know Marpet isn’t the only one guilty of this. but it’s something he needs to improve on.

Alex Cappa had been playing very well until the Browns’ game in Week 3. Cappa got schooled Friday as he got manhandled one play and the other lost track of a player coming around on an inside stunt. As a young player that is something, he can learn from and get better at because those are veterans that he played against and I don’t expect him to win every battle against good players this early in his young career. Cappa has impressed me in the run game by getting to the next level to block linebackers and has been noticed throwing defensive lineman to the ground when he has opened a running lane for the running backs. This is going to be the year we get to see what Cappa is made of because he will play some decent interior defensive lineman this season. One example Aaron Donald.

Ryan Jensen signed a four-year $42 million contract ($22 million guaranteed) making him the highest-paid center in the NFL. He has yet to make me say “damn I’m glad we got him”. Jensen has cost this team negative penalty yards because of dumb penalties and at times doesn’t look to ever dominate at his position. Jensen needs to take leadership on the offensive line and turn them into a bunch of mean men when they play on Sundays. I expect a lot of Jensen because he has played with great offensive linemen and has playoff experience. Jensen needs to share his knowledge of this game with the younger players and help this line be successful in future games.

The Buccaneers offensive line is full of veteran presence and needs to get better sooner than later.