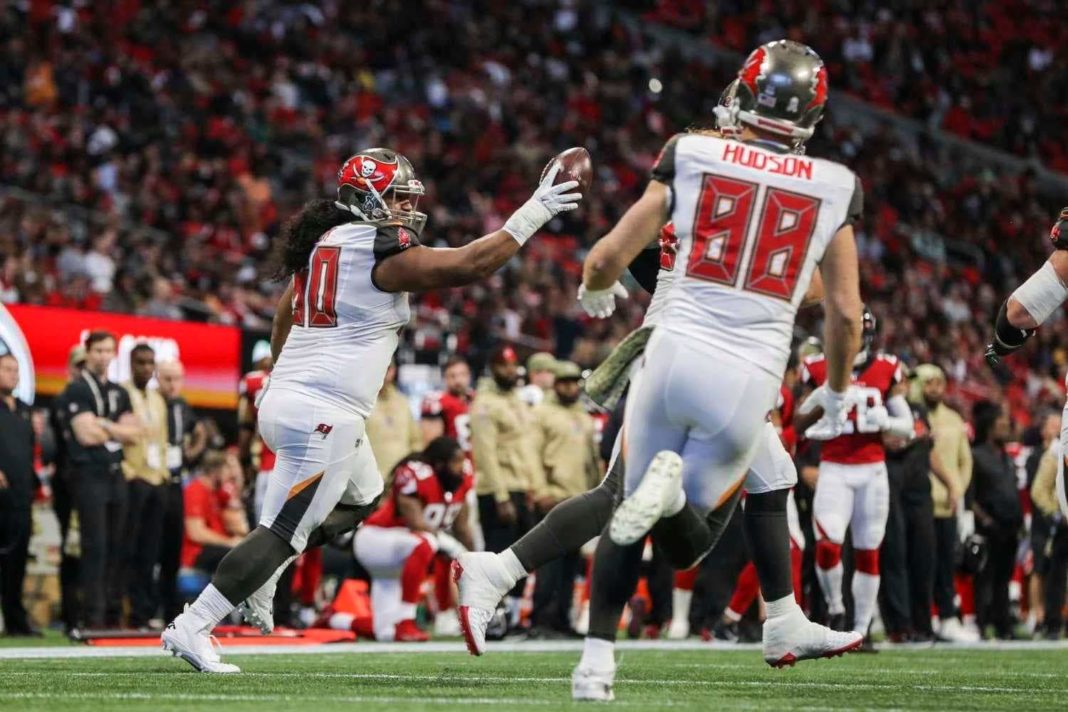 The Buccaneers overcame a slow start yesterday and defeated the Atlanta Falcons 35-22. This was a game that saw the resurgence of the Buccaneers’ defense. Not just the defensive line but the entire defense!

To call the game the Buccaneers defense played yesterday historic might be a bit of a stretch. But a Tampa Bay defensive player did in fact make history yesterday!

Did you miss the play? It was 2nd and goal for the Buccaneers and they lined up in a form of their jumbo-set. As soon as the ball was snapped you could hear a collective yelling of “VITA” as the defensive tackle peeled off the line and headed for the endzone. Vea was virtually uncovered and Jameis Winston delivered the ball! Boom, NFL history was made!

Vita Vea became the heaviest player (347 lbs) to catch a touchdown pass in the NFL’s history.
The previous heaviest player to do so was Jon Ogden (345 lbs) and before him, William “Refrigerator” Perry at 335 lbs!

Video: Bucs DT Vita Vea talks about his “surreal” touchdown catch to help Tampa Bay to a 35-22 win over the Falcons. pic.twitter.com/4qHfB5cpQa

The Buccaneers seem to have a habit of defensive tackles catching touchdown passes against the Falcons. You may remember…….

Lets not dismiss Vea’s play on the defensive side of the ball. The 2nd year defensive tackle was a force, a wrecking ball in the middle of the trenches all day. Vea made history yesterday, but he also put the league on notice. You can’t block him with one man, apparently you can’t cover him with just one either.

Bucs Report Staff - November 29, 2021
0
The Tampa Bay Buccaneers are fresh off of their 38-31 win over the Indianapolis Colts. The team has been struggling with injuries all season,...