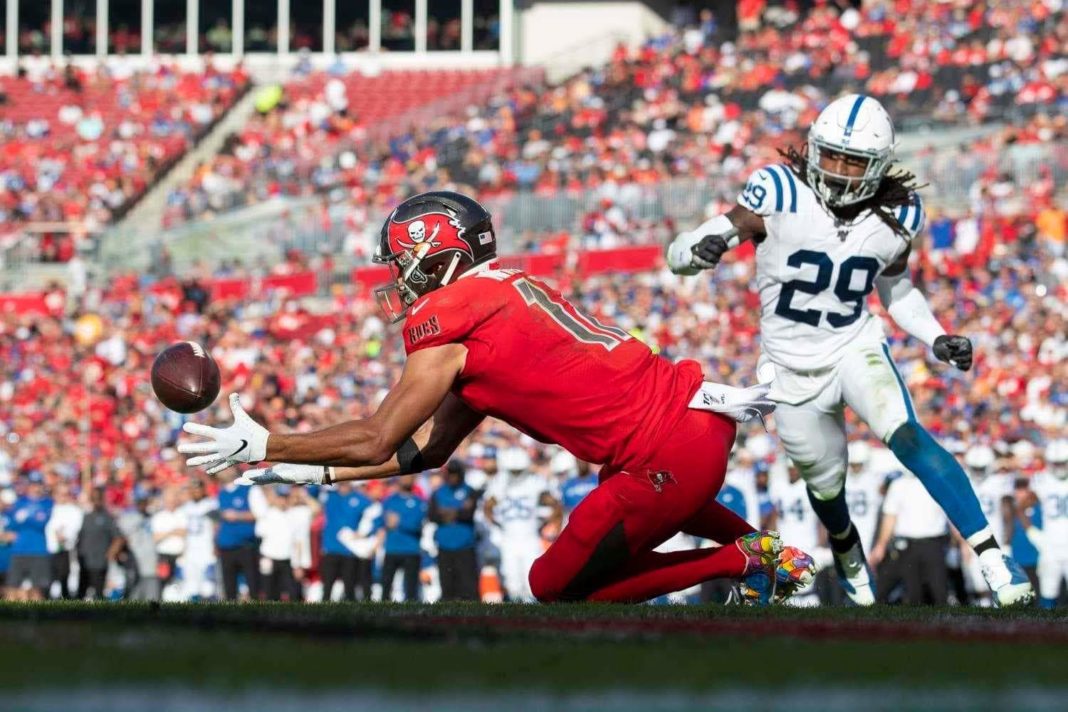 Buccaneers 2nd year wide receiver Justin Watson had his first professional TD on Sunday against the Colts (see interview here). Filling in for an injured Mike Evans, Watson finished the day with five receptions for 59 yards and one TD on eight targets. Let’s learn a little more about the Ivy League receiver.

When WR Justin Watson ran his 40 at his pro day back in 2018 there were questions. Expected to run in the 4.5s, after completing the run, one of the two dozen or so scouts situated at the finish stated he needed somebody else’s time. “My clock is wrong”, he said. Another scout said the same thing, then a few more. Finally, Penn Quakers’ offensive coordinator John Reagan told them their times weren’t wrong, their expectations were.

The 6’2 Justin Watson’s athletic ability was matched only by his scholastic success. He averaged 21 yards per catch as a junior at South Fayette (Pennsylvania). He also had a 4.0 GPA and had scored 1380 on his SATs. Watson had a senior season for the ages; he would haul in 63 passes for 1,568 yards (25 yards per reception). The single-season yardage total ranked third in Pennsylvania history. He was named First-Team All-Conference and First-Team All-State. Watson also played basketball for 3 years and was captain his senior season.  He would ultimately choose to go to an Ivy League school where he could continue his passion for both football and scholastics.

The Cream Rises To The Top

After joining the University of Pennsylvania, he would achieve immediate success on the football field. Playing all 10 games in 2014 he would set a freshman team record with 42 receptions and record 497 yards receiving and 2 scores. The next year he exploded onto the national scene with 74 catches for 1,082 yards and 9 touchdowns. All marks that led the Ivy League. Unanimously voted a First-Team All-Ivy League honoree and runner-up for Ivy League Offensive Player of the year.

Justin would do even better his senior year at Penn with 89 passes for 1,115 yards and eight touchdowns. He won First-Team Ivy League for the second time and was nominated for the Walter Payton Award as the FCS Offensive Player of the Year.

Back to that pro day back in 2018 (article here), Watson’s consensus time of 4.42 would have tied for fifth at the NFL combine. More impressively, his 20 bench presses of 225 would have been fourth-best, and his 40-inch vertical jump would have led all receivers. At 6’3, 225 pounds, a talent like this would usually not be able to surprise as Watson did. Then again, it isn’t always you find this type of talent on an Ivy League roster like Penn. Jason Licht drafted the talented receiver in the 5th round (#144), and even on a team deep with talent at the WR position, he has really started to make his mark.

Buccaneers fans know that if Mike Evans hamstring injury should linger, they will be expected to continue to see the type of production they saw out of Watson on Sunday. In a league of “next man up” mentality, it’s just plain smart to have a receiver like Watson at the ready.

Evan Winter - May 7, 2021
0
When Bruce Arians arrived, one of the main problems that required immediate attention was the culture that surrounded the Bucs. It simply wasn't there....

Bucs Report Staff - May 6, 2021
0
The Tampa Bay Buccaneers continue to add pieces to an already stacked roster. Thursday they claimed OLB Ladarius Hamilton off of waivers from the...

Evan Winter - May 6, 2021
0
The Bucs decided to sign two free agents to their roster on Wednesday, and now, they’ve added another in cornerback Nate Brooks. The team...

Evan Winter - May 6, 2021
0
They always say it's easier to find success than to sustain, but don't tell that to the Bucs, who currently sit atop the NFL's...