Bucs Report
Home From The Stands What to do with Winston? 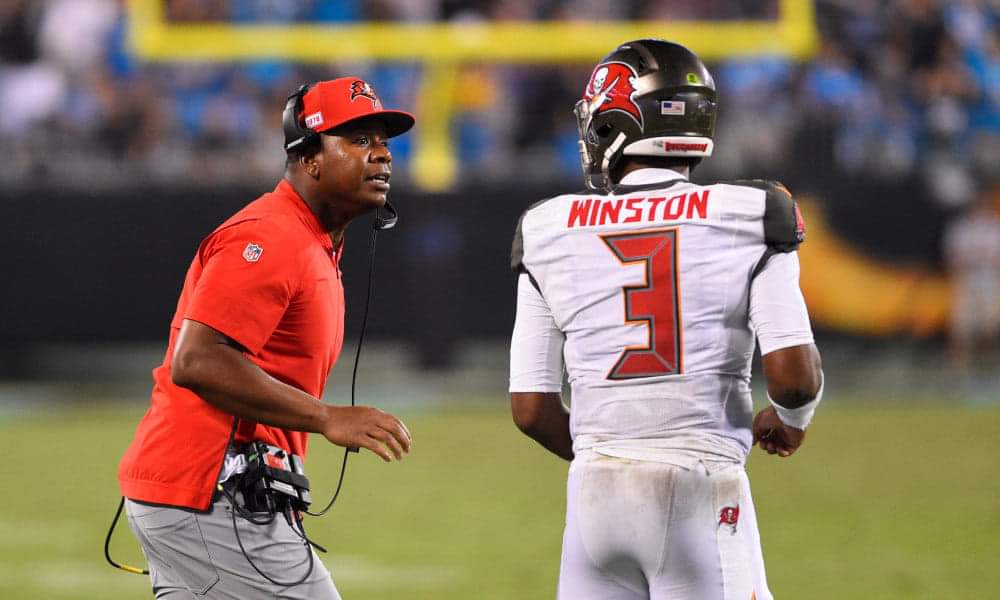 With only three weeks left in the 2019 NFL regular season, we are one week closer to that dreadful decision. That decision looming over this Buccaneers organization is, what to do with Jameis Winston? Yes, that same decision that has the entire Buccaneers’ fanbase split right down the middle.

Winston has become such a polarizing individual within Buccaneers’ circles. Winston is literally the most beloved and hated player this franchise has seen in its 43+ year existence. He is on his third head coach, all three from Lovie Smith to Dirk Koetter to Bruce Arians have failed at stopping Winston from turning the ball over on a regular basis. We all know now that when Winston’s on the field turnovers are prone to happen.

Maybe He Just Is What He Is

Maybe Winston can’t be fixed in that regard and that’s just who he is like Brett Favre was.
Like Farve, Winston has this knack that he can literally make every throw even when facing tremendous odds. Winston will likely end the 2019 season leading the entire league in passing yards, interceptions, and touchdowns.

The fifth-year QB will end the 2019 season having over 100 turnovers in his career. Winston already owns damn near every meaningful quarterback record the Bucs have. For me being a life long Buccaneers fan since 1996 the decision to keep Winston or move on is simple.

The most logical thing for me is having Winston suited up for the 2020 NFL season playing alongside Mike Evans and Chris Godwin. In my opinion, the Bucs should place the franchise tag on Winston for the 2020 season and see what he does in year two of the Arians/Leftwich offense. With Arians’ age, I don’t see the Bucs drafting a rookie quarterback to take Winston’s place. Yes, picking up a veteran like Andy Dalton or Phillip Rivers is an option but it’s not logical. Picking up a veteran signal-caller will take time for chemistry and team continuity to build and Arians doesn’t have that luxury at his disposal.

If you really analyze this Buccaneers team, their roster has tons of uncertainty at key positions. In order to compete right now in the lackluster NFC conference, the Buccaneers are literally a veteran running back, safety and two new tackles away from being competitive and making the playoffs.

The Buccaneers must move on from Demar Dotson and find a way out Donovan Smith’s dreadful contract. You have to have insurance on the back end of that secondary because Justin Evans and Andrew Adams are liabilities. Also, get Winston a bruiser running back, someone like a Latavius Murray or Mark Ingram, Jr.; a back who will take no prisoners and look to dish out punishment on defenders using physicality.

It might not seem like the most popular move to franchise Winston in 2020 but it makes the most sense. Maybe Arians can still coach some of the turnovers out of his QB and minimize his mistakes. The Bucs are easily cruising to a 13 or 14 win season with a top 5 offense and hopefully top 10 defense in 2020.