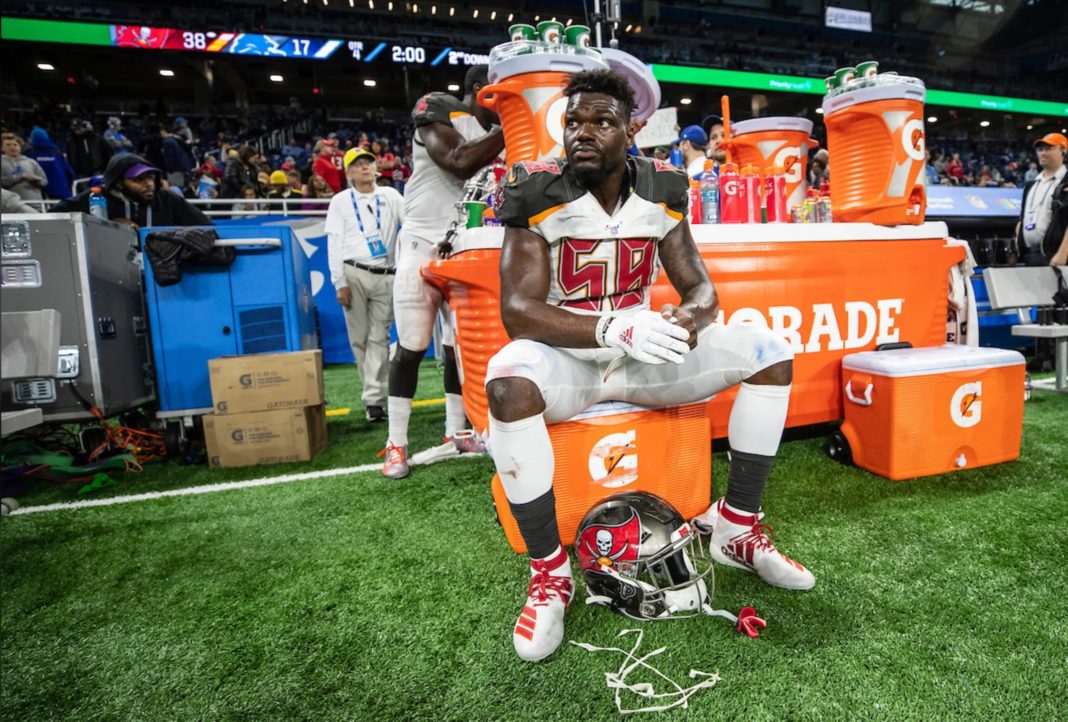 This week against the Atlanta Falcons will be the last chance for Shaq Barrett to move into sole possession of the Buccaneer single season sack record. Currently tied with Warren Sapp at 16.5 sacks. The free agent from Denver has exceeded the team wildest expectations for the season. But why stop there?

After spending the first five years of his career in Denver, Shaquil Barrett was ready to break out. Playing behind stars like Von Miller, Demarcus Ware and Bradley Chubb had made the former undrafted player out of Colorado State a little hungry. Hungry for sacks, playing time, and a chance to start. Putting a 3-4 defensive scheme into place, Todd Bowles could offer the LB all three.

Hall Of Famer On The Line

It took a single sack last week in Detroit to tie an almost 20 yr old Buccaneer record. Barrett got a message from Sapp via Instagram after he pulled even with the Buccaneer Hall Of Famer.

It All Comes Down To This

A week 17 matchup between two teams long ago eliminated from the playoffs. a post-Christmas, pre-New Years game where pride is on the line against a divisional opponent. The end of a season that has given Buccaneer fans quite a few ups, and downs.

We still have a chance to see history made. A record once held by Lee Roy Selmon. Held solely by Warren Sapp for near two decades. A record that nobody saw Shaq Barrett chasing. Well, nobody except him. He knew it was time to break out. Just nobody knew how much.

Bucs Report Staff - October 16, 2021
0
Buccaneers cornerback Richard Sherman announced on his podcast that he will be out with a hamstring injury for "at most, I think, a couple...

Bucs Report Staff - October 16, 2021
0
The Tampa Bay Buccaneers left Philadelphia with a win Thursday night. After being up early on the Eagles the Buccaneers held off a late...