Can you believe it? Lavonte David was left off the First-Team All-Pro Defense once again. Ok, ok. So maybe he didn’t end up making the All-Pro Team, but at least he made the Pro Bowl right? Wrong again.

The Disrespect Of David

I think we can all agree that the disrespect David continues to receive from the NFL and fan voting is UNREAL. If I am David I am wondering what on God’s green earth do I need to do to prove myself anymore? Yes, he did make the NFL All-Decade Team (rightfully so) but let’s not act like he hasn’t been overlooked his entire career. Let’s go ahead and take a look at a few career stats. 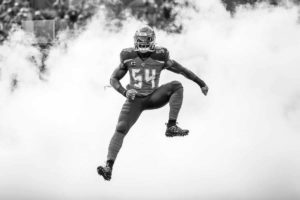 This year, David joined Derrick Brooks and Ronde Barber as the only Buccaneers to record more than 1,000 tackles in Tampa Bay.

There are only two players in NFL history that have at least 1,000 tackles, 20 sacks, and 10 interceptions through eight seasons — those players are Ray Lewis and Lavonte David. Only two other linebackers have reached 1,000 tackles in fewer games and they are Bobby Wagner and Luke Kuechly.

If a person were to hide David’s name from his career stats, one would assume that we are looking at a future Hall of Famer that has a resume full of Pro Bowl and All-Pro appearances. That is just not the case for David as he is constantly being overlooked by the NFL and fans everywhere. The only thing I can think of that will get his name recognized as it should be is for the Buccaneers to get back to a top 10 defense and start winning games again.

Evan Winter - April 20, 2021
0
And to think, to this day, Twitter continues to exist as a free website. Yes, it can be nothing but a barbarous hellscape that destroys...

Evan Winter - April 20, 2021
0
Our own J.T. Olson already discussed the thought of the Bucs trading back with the Jacksonville Jaguars during the NFL Draft. What a would trade...