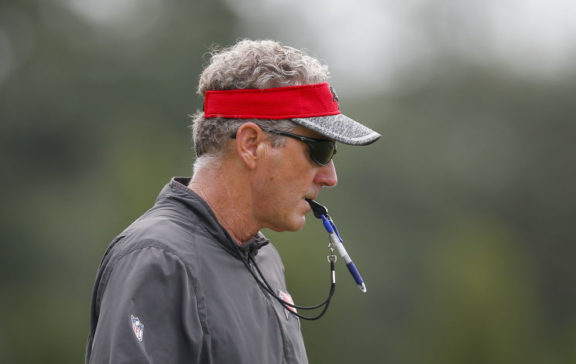 Throughout the off-season, training camps and the beginning of the Football season, Bucs fans and Coach Koetter were confident that this was going to be our year! After adding some impressive new weapons to the team, and fans getting to see inside the lives and the locker room of our players on Hard Knocks, the team really looked to be shaping up for a rock solid season. In April, when asked by ESPN’s, Jenna Laine,  what kind of identity, he wanted for his Football team, Koetter responded with, “A badass football team. How’s that?”

However, throughout the season so far, the Bucs have been plagued by injuries, persistent kicking issues, inconsistency and lack of chemistry on the field, etc… And after a disappointing loss against the Cardinals on Sunday, it had Coach Koetter criticizing himself, “I can’t tell you how disappointed and embarrassed I am in the way we played the first two quarters and the first two series of the third quarter,” Koetter said, via the Tampa Bay Times. “And unfortunately, that starts with me. I obviously did a horrible job of getting these guys ready to play because that was the worst first half of football I’ve ever seen in my life.”

It looks like they have a lot to work on and repair before they hit the field against Buffalo. Am I confident they can do that? Yes. Hang in there Bucs fans, don’t lose faith, it’s been a bumpy season, but the season isn’t over yet! They can still turn this around.