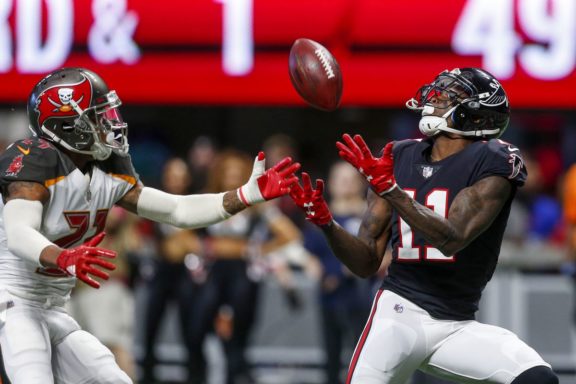 Last time the Buccaneers played the Falcons it was a Monday Night Ring of Honor Induction for Jon Gruden.

It was an overall pleasant evening, Keith Larson I and were enjoying one of the last cigarettes we will have ever smoked in Ray Jay, then Falcons took to the field and Julio Jones went off, having a record-breaking night.

Jones had 12 receptions for 253-yards and two touchdowns, to make matters worse Julio Jones hauled in a 51-yarder from receiver Mohamed Sanu, and the Falcons beat the Buccaneers 34-20.

Historically Falcons receiver Julio Jones has had success against the Buccaneers defense, staring as far back as his rookie season in 2011.

September 25th, 2011 was the first time Julio Jones played against the Tampa Bay Buccaneers. Jones had a great rookie season and a pretty good start to his career against the division rival. With 6 catches,115-yards receiving, and no touchdowns, this game marked Julio Jones’ first 100-yards NFL game of his career. However, the Buccaneers came out on top 16-13.

Later on, in the 2011 season on January 2012, Jones again faced the Buccaneers but this time did not reach the century mark with 4 catches for 76-yards. What Jones did do, however, is find the end zone twice and helped beat the Bucs down badly 45-24.

2013 was a little bit of a break from Julio for the Tampa Bay Buccaneers as he was out most of the season with a knee injury.

However, 2014 reared its ugly head. That was the 2-14 season that landed the Bucs the number one overall draft pick and Jameis Winston as QB.

The next meeting on 11/09/14 was not much better as Julio Jones still caught 8 passes for 119-yards, but this time he did not find the end zone. The only good thing to come from that game was the Bucs only losing by 10. 27-10 Falcons.

In 2015, Jones had only one great game vs the Buccaneers and that was on November, 1st. He recorded another 162-yard-1-TD-game, but this time it took a few more catches than the previous time. Bucs won that game 23-20.

The following game, The Falcons spanked the Buccaneers 43-28 and Julio had another 100+ yard game with 8 catches and a touchdown.
Now it is 2018, and the Buccaneers secondary is no better than the previous times these two teams met. Julio has not found the end zone this season, despite putting up 160-yards on 10 catches against the Eagles and 173-yards on 9 catches against the Bengals.

If the Buccaneers cannot figure out how to right the ship on defense during the bye week, we could be looking at another milestone game for Julio Jones and his first pair of touchdowns this season.