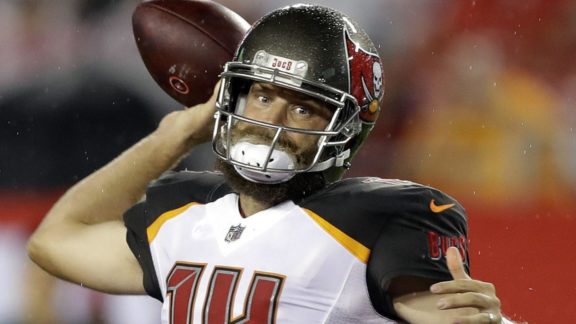 During Sunday’s game Tampa Bay Buccaneers’ head coach Dirk Koetter decided to put a stop to franchise quarterback Jameis Winston’s attempt at setting the NFL record for most interceptions thrown in a single game. Winston only managed to make it halfway, throwing four. Koetter decided to let his backup Ryan Fitzpatrick finish the game instead.

FitzMagic managed to tie the game, but the Cincinnati Bengals managed a game-winning drive by kicking a last second field goal to close the game. Regardless, he put the Bucs in a position to win the game if not for the defensive blunder.

In a season marked with several lows and few highs, Fitzpatrick manages to be the most surprising high of the Bucs season with his 2-1 record in games he started and finished. With the exception of the Chicago Bears game, for which he was benched because of the team’s horrible performance in the first half, he managed to help keep the Bucs within a score in all of his appearances. He’s currently at a 119.3 QB rating, 1,550 passing yards, 13 passing touchdowns, 5 interceptions, 2 fumbles and an 80.1 QBR rating.

By comparison, Winston managed a 1-1 in complete games he started but hasn’t been much more effective, just adding a TD and 2 INTs against the Bears in relief of Fitzpatrick. He was more effective against the Falcons with 4 TDs and 2 INTs. He came crashing down to earth with 2 INTs against the Browns in a sloppy game before his horrific showing at Cincinnati with 1 TD and 4 INTs, which includes a pick 6 to the Bengals’ defense. Through 4 games, Winston has 1,181 passing yards, 6 TDs, 10 INTS, 4 fumbles, 74.7 QB Rating and 62.7 QBR rating.

What’s more disturbing is how both QBs are 2nd and 3rd in team rushing, Winston being 2nd with 109 rushing yards followed by Fitzpatrick at 80 yards. Both are behind leading running back Peyton Barber at 345 rushing yards.

Now the elephant in the room—the Bucs sit at last place in the NFC South, tied with the Falcons but ultimately losing to them due to their recent contest. Koetter declared Fitz to be the starter against the 5-2 Carolina Panthers in another critical division game this Sunday. When pressed about whether the move was permanent for the season, the coach quickly said he’s only looking at the current game and not any further out.

Assuming Fitz doesn’t cost his team critical drives and reverts to his old ways, he could be the one stable element the team’s been lacking all season. There wasn’t supposed to be a QB controversy, but the current staff’s hot seat status turns this season into a win-now situation.

Because they didn’t make any trades at the deadline, the team will have to find a way to create enough diversity in their playbook to keep drives going and not gas an already thin defense, which doesn’t seem to be much better under interim defensive coordinator Mark Duffner than his deposed predecessor Mike Smith.

As long as the team can stay competitive and one step above their opponents like they were against the Eagles and the Saints, they could ride this trainwreck out. But as we run out of season, they will have to depend on others to lose in order to punch their ticket in as opposed to controlling their own destiny.

Winston could still be the QB of the future, but he’s not the QB for now according to the coach this week. As far as the coach’s faith in Fitzpatrick now, there’s no telling how short a leash Koetter will have him on. It will depend more on the score than clean play. Keep in mind, Winston was inserted into the Bears game after the half despite Fitz only having one turnover.

With Koetter feeling the heat, the only way we’ll know for sure if he’ll stick to a guy is if the Bucs have control of the game or at least keep it close. Conventional wisdom would suggest to just stick to someone, go with the hot hand and at least give Fitz more of the benefit of the doubt for the game than he was given against Chicago.

In other words, as long as the Bucs stay respectable in a game, he’ll stay in. If he somehow recreates games one and two performances, we may be back to singing “Oh oh, it’s Fitzmagic…you know…”

The Buccaneers’ Front Seven vs. The Packers Run Game

The Buccaneers’ Front Seven vs. The Packers Run Game

Jeremy Morrow - January 22, 2021
0
The Green Bay Packers boast a very strong run game as they rank eighth in yards for the season. That creates a balanced offense...

Bucs Report Staff - January 22, 2021
0
The Buccaneers and defensive tackle Vita Vea have been at the top of the headlines all week. Friday the team announced they are officially...

NFL History On The Line For the Buccaneers This Sunday

Jeremy Morrow - January 22, 2021
0
No team in NFL history has played in their home stadium for the Super Bowl. If the Tampa Bay Buccaneers can secure victory this...
Load more