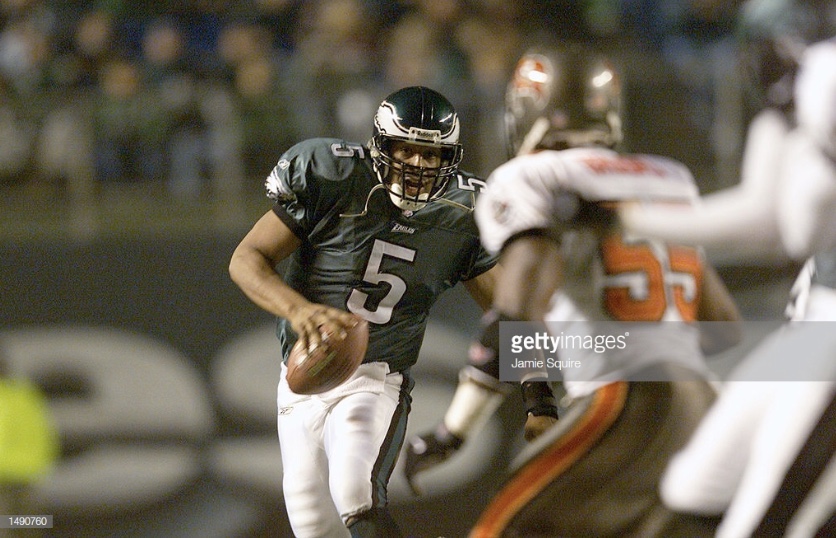 The 2002 NFC Championship Game seemed like just another hurdle the Buccaneers would clear on their way to becoming NFL Champions. The previous year, they traveled to Philadelphia in the wildcard round and lost to the Eagles mustering only three (3) field goals on the way to a 31-3 Eagles victory.   But 2002 would yield a different result for the Tampa Bay Krewe who marched into the last game ever played at the Vet and defeated the Eagles 27-10.   For Eagles fans this day would become known as “Black Sunday.” For Buccaneers fans it was “Sunday Funday.”

The temperature was 26 degrees at kickoff, but this was no longer the Tampa Bay team that would struggle if the temperature was 48 degrees of below. The game started out with Eagles RB Brian Mitchell returning the opening kickoff 70 yards to the Tampa Bay 26. Duce Staley capped it with a 20-yard run, and the Eagles were up a touchdown less than a minute into the game. On the ensuing drive, the Bucs stalled and settled for a long 48-yard field goal from Martin Gramatica. For just a moment, Tampa Bay fans wondered if head coach Jon Gruden would suffer the same fate his predecessor, Tony Dungy has endured, trading field goals for touchdowns with the Eagles. On the following drive the Eagles were stopped at the Buccaneer 32 yard line and opted to punt, pinning the Bucs at their own four (4) yard line. The Buccaneers drove the ball 96 yards, capping the drive with a 1-yard touchdown from the A-Train, Mike Alstott. A key play on the drive was a 71-yard completion from Brad Johnson to Joe Jurevicius. The Eagles tied it up at 10-10 before Brad Johnson orchestrated a 12-play, 80-yard drive with a 31-yard completion to Michael Pittman and passes on 22 and 12 yards to Keyshawn Johnson, the second being a touchdown. With time running out in the first half, Donovan McNabb drove the Eagles to the Buccaneer 24-yard line before Simeon Rice, McNabb’s high school teammate strip-sacked the Philadelphia signal caller and recovered the ball himself. Buccaneers were up 17-10 at the half.

On the opening drive in the third quarter, McNabb lost the ball on another fumble, this one orchestrated by Ronde Barber with Ellis Wyms recovering. After some back and forth, the Bucs would drive late in the 3rd quarter. With a timely pass interference call and a 19-yard catch by TE Ken Dilger, Tampa Bay would settle for a Martín Gramatica field goal for a 10-point lead.  With one quarter to go,  the game was very much still in the balance, but let’s not forget with all due respect to the ‘85 Bears and the 2000 Ravens, this was the BEST DEFENSE in the history of the NFL. A 10-point lead felt comfortable. The Eagles managed to drive the ball to the Tampa Bay 10 yard line, but a Ronde Barber, 92-yard “pick six” would seal the deal. 27-10, the Buccaneers were NFC Champions for the first time in team history. They flew back to Tampa Bay for a cup of coffee before heading out to San Diego for Super Bowl XXXVII.