Ladies and Gentlemen the moment you have all been waiting for. Donovan Smith gets to either put up or shut up against Cameron Jordan. Earlier this year Smith was awarded a contract extension and Jordan really loved it. Wait, did I just say Cameron Jordan really loved it? Yes, Jordan went on the internet via Twitter and made a comment saying “food solidified for another 3 years”. Jordan showed Smith no respect for his game and is chalking this first meeting up as his first meal. 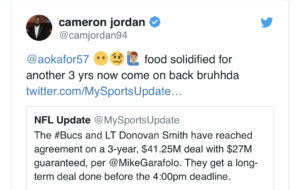 This coaching staff has made their mark about being prepared with a proper game plan against good teams. The Buccaneers made Aaron Donald a non-factor in their mathup against the Los Angelas Rams. I look forward to seeing what kind of approach the Buccaneers take in facing Jordan. Ryan Jensen has stepped up and has become a leader on this young line and it’s really starting to show in Alex Cappa, Jensen, Ali Marpet, Santana Dotson’s play. Smith has to remain aggressive in protecting Jameis Winston and keeping him upright if the team wishes to continue the same success its been having over the past few weeks. After last week I think it was been clearly noted that this unit has gotten better and is looking to be ranked higher than PFF hd them last week.

This defensive front is ran and operated by none other than Cameron Jordan. His supporting cast are Sheldon Rankings, Malcom Brown and Marcus Davenport. This band of misfits has the intentions of making the Buccaneers offensive struggle and shut them down on the ground and through the air. The Saints  weakness on defense is their linebackers with fallen star Kiko Alonzo, AJ Klein, Demario Davis. This unit does not have tons of speed to cover backs and tight ends. Look for the Buccaneers attempt to make these linebackers run sideline to sideline.

The Buccaneers are in for a long day against the Saints defense led by Jordan. If they play the way they have been this should be a great matchup.