The Buccaneers are one of the teams sending representation to observe the NFL’s planned workout for pariah Colin Kaepernick. Whether if it’s the NFL’s way to settle for losing their collusion case against him is up for debate. News of the olive branch to hold a workout for interested teams reopened old wounds (or maybe they never closed).

The long-standing argument against Kaepernick returning is the attention he attracted for kneeling during the National Anthem in 2017. At the suggestion from a veteran, Kaepernick decided to kneel to protest national police brutality. Others around the league joined in the protest and a political firestorm erupted particularly from the right, who accuse him of disrespecting the country and armed forces. 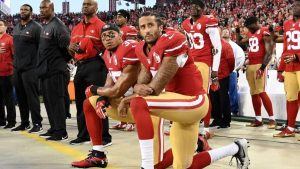 Among Kaepernick’s supporters was Green Bay Packers quarterback Aaron Rodgers. Despite his and others’ support of Kaepernick’s message, only the former San Francisco 49ers QB remained unemployed since the 2017 season. While searching for a new team and keeping up his NFL shape, no team signed him. Not even a tryout.

Detractors point to Kaepernick’s protest, late decline, financial demands, and attention he generates as reasons why he doesn’t deserve another shot. Whatever the opinion and values are on the QB, there are worse offenses NFL players emerged from and received another chance.

Former Atlanta QB Michael Vick was sentenced to 23 months in prison for his part in financing a dogfighting ring, yet he was signed by the Philadelphia Eagles in 2009.

How do the two compare? Kaepernick was a better passer in his six seasons with the Niners than Vick was with the Falcons, Eagles, Jets, and Steelers in 13 seasons. Vick was a better running threat and averaged just one more rushing TD per season. Putting the average numbers together, Kaepernick averages 230 more productive yards than Vick.

So clearly Kaepernick was a more productive player than Vick, yet he still can’t find another team. Some never want to see Kaepernick on the football field again. Football is a subjective sport, but stats don’t lie. It’s not skills, but personal politics at this point.

Despite his exile from the NFL, Kaepernick still resumed his philanthropic ways, but none of that matters to his harshest critics. One final question: Is three years away enough?

Ray Kennedy - January 18, 2022
0
So the Bruce Arians/Andrew Adam’s thing is really a thing? That slides to #1 on my list of things that were stupid this past NFL playoff...

Bucs Report Staff - January 17, 2022
0
The Tampa Bay Buccaneers defeated the Philadelphia Eagles Sunday 31-15. It was revealed later Sunday that the Buccaneers would play the winner of Monday...