Bucs Report
Home From The Stands Is the Buccaneers secondary fixed? 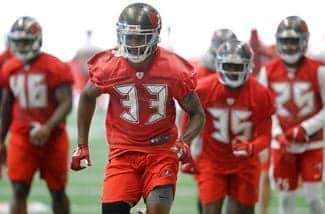 Back in June of 2019, Bruce Arians uttered those words stating that the Buccaneers secondary had totally been fixed.

Fast-forward to August and September and Bucs fans quickly realized the secondary wasn’t completely fixed. A large part of the issue, obviously, was Vernon Hargreaves. An early injury to Jamel Dean and Sean Murphy-Bunting still adjusting to the speed of the NFL compounded the issues.

After they cut former first-rounder Hargreaves, the Buccaneers secondary flourished immediately. The pass defense ended up finishing the 2019 season as one the best in the league.

Auburn duo Carlton Davis and Dean were a large part of the resurgence of this Buccaneers defense. Davis finished the 2019 season with 19 passes defended behind arguably the best corner in the NFL Stephon Gilmore who led the league with 20. Dean, as a rookie, finished the 2019 season in spectacular fashion with 17 passes defended tied for 4th with the likes of Jair Alexander, Tre’Davious White, and Joe Haden.

Arians saw all the talent in OTAs and training camp and although his comments on the secondary were a little premature, overall, he was right.

Todd Bowles runs a hybrid scheme that allows the DBs to be a little more flexible and aggressive. It also helped that his defensive line finished with the league leader in sacks in Shaq Barrett and arguably the best front seven in all of football.

I tried telling Bucs fans once if Tampa Bay decided to move on from Hargreaves this secondary would be led by Davis. He possesses all the intangibles you need to be successful in the NFL with his size, speed, and his aggressiveness. The 2020 season will be crazy as Dean and Davis will look to lead this young secondary into the playoffs.

Now that all these young talented players understand the speed of the NFL and Bowles hybrid scheme, the Buccaneers defense has top 5 potential. That’s why it’s very imperative the Bucs as an organization do not overpay Winston.

They need to allocate as many resources to defense as possible. The defense is the future for this organization. They must re-sign the defensive line and find a way to lock-up Lavonte David longterm. This team needs to be in win-now mode. They need to take advantage of all the rookie contracts on defense.

Ray Kennedy - May 6, 2021
0
When you are born, raised, and ultimately play football in a hotbed of Division 1 talent like Manvel, Texas, it’s in your blood. It...

Bucs Report Staff - May 5, 2021
0
The Tampa Bay Buccaneers have been one of the busiest teams in the NFL this offseason. Re-signing every starter from their Super Bowl championship...

Joshua Cole-Allen - May 5, 2021
0
Giovani Bernard is no longer the only outside free agent brought in by the Buccaneers - the team announced Wednesday they have signed veteran...

Bucs Projected To Have Easiest Strength Of Schedule

Ray Kennedy - May 4, 2021
0
First off. Your 25-years-young today, Ke’Shawn Vaughn. Some of us have socks that are older. So please excuse if we pass on the “another...
Load more