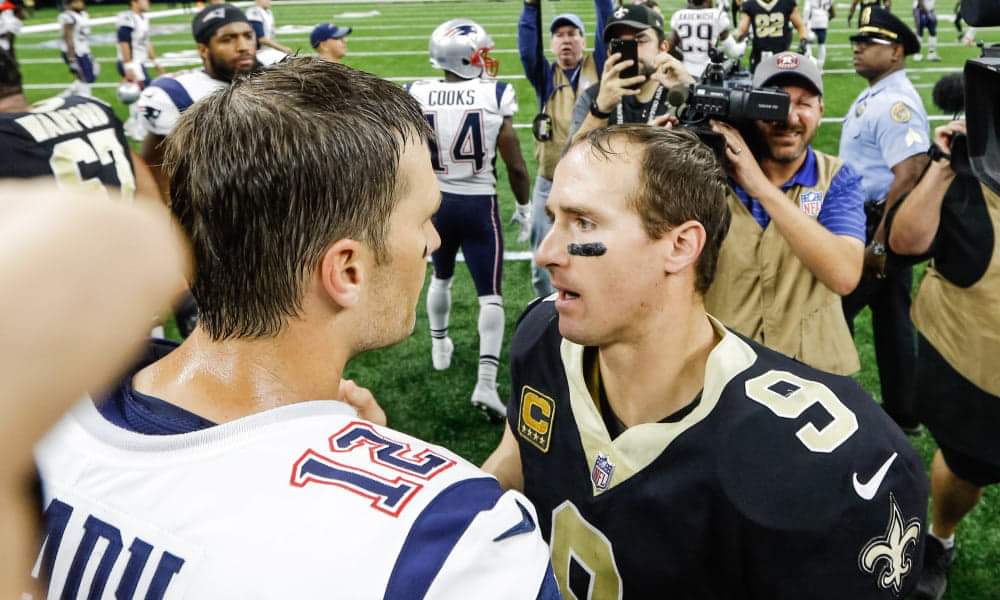 Assuming the Bucs franchise tag Jameis Winston in the very least for the 2020 season, the front office and coaching are discernably on the fence about the first overall pick of 2015. As the only quarterback in NFL history to throw 30 touchdowns and 30 interceptions in a career season, Winston’s focus of controversy amidst the team’s struggles. While owning all major passing records in franchise history, he has only one winning season and on his third head coach.

Amassing a 28-42 record and over a decade with no playoff appearances, perhaps it’s time for the team to sign a veteran starting QB and determine who starts in open competition in training camp. Here are 2020 free agent veteran QBs and the chances I think they could come to Tampa this offseason.

Considering Drew Brees’ loyalty to head coach Sean Payton  and having won his only Super Bowl with the New Orleans Saints, it’s unlikely he finishes his career anywhere else. The team continued their division dominance in the NFC South despite their first-round exit. His standing with the team is never in question. He’ll finish his career with the Saints.

Tom Brady’s done it all with the New England Patriots. The team and Bill Belichick has given him six Super Bowl rings. Brady’s even bent over backward taking pay cuts to keep the team competitive the past two decades. The only question remains is does he attempt to separate his greatness from Belichick? The last time the team lost in the wildcard round was in 2009.

If Brady decides to move on wanting to earn his full potential, the Bucs could be on a shortlist of destinations only because of Bruce Arians. Arians allowed Carson Palmer to sustain his high level of play at the end of his career. Aside from that, Brady likely wants to play for a contender. The strongest suitors for his talents include the Denver Broncos, Philadelphia Eagles, and Minnesota Vikings (sorry, Kirk Cousins).

Despite winning two Super Bowls, Eli Manning runs into a similar turnover issue Winston has. It would almost be a lateral move for him. He would likely rather retire them sign a new contract to be a backup with Daniel Jones firmly in place as a team’s starter.

*since publication of this article Eli Manning has retired.

Philip Rivers spent his entire 16-year career with the Chargers. Supplanting Brees as a starter who ended up traded to the Saints, the 38-year old made the playoffs in half his time with the team. Production remained steady in a tough AFC West division. Despite throwing almost a career-low 23 TDs in 2019, he still threw for over 4,600 yards.

It would be no surprise if Los Angeles decides to draft his successor following their 5-11 season. If the Bucs want a candidate for a rental with a chip on his shoulder, Rivers could benefit from the change of scenery. All bets are off should the Bucs re-sign Winston to a long term deal.

Rivers likely ends up being the best candidate for a steady hand for a starting position.

Teddy Bridgewater exceeded expectations taking over for an injured Brees early in the season. While credit goes more to the Saints’ staunch defense, the former Vikings starter was far from a liability. Bridgewater posted career-high in completion percentage, threw for nine TDs and only two INTs in his perfect 5-0 stint.

The Bucs’ last few attempts at catching lightning in a bottle with QBs ended miserably with the likes of Byron Leftwich and Josh McCown. It makes little sense for the Bucs to gamble on Bridgewater given his long term uncertainty.

When it comes to available QBs who can start from free agency, there are some quality options. Ultimately, the future success of the Bucs comes down to mastering the final two minutes of the game. Which one of these veterans would you trust to close the game? A rookie, Jameis Winston or a proven veteran starter from the current pool?