What’s going on, Bucs fans? This is my first post with Bucs Report, and I’m truly excited to be joining such a great group of writers to cover the team. I’m especially grateful to Evan Winter, who helped bring me on board. My goal is to bring you fresh, thoughtful, and entertaining takes on the Bucs, which I hope I’ll accomplish. What better time to come on board then draft week?

All of the over-analysis and mock drafts are spinning into overdrive this week. So, naturally, I thought I would join the fold.

I decided to use the PFF mock draft simulator in order to give myself/you all a realistic vantage point for who the Bucs will pick in this mock draft.

Round 1, Pick No. 25: Bucs Move Up To Select EDGE Jaelan Phillips, Miami Hurricanes

It took a 2022 second-rounder and moving down eight picks in the fourth round to get ahead of some teams that might be looking for a pass rusher. But with the lack of quality depth at edge this year, I wanted to snare an impact player.

Phillips projects as either a 4-3 DE or 3-4 OLB and was one of the biggest comeback stories of the 2020 season in Coral Gables. Phillips took the No. 15 jersey from Greg Rousseau – who opted out of the 2020 season- and turned in a performance that many expected from Rousseau and then some. Phillips totaled 15.5 tackles for loss and 8.0 sacks over 10 games, while earning AP second-team All-American honors in 2020. The Bucs will snag one of the most athletic pass rushers with this pick in the draft.

With Jason Pierre-Paul in the final year of his contract, having a capable pass rusher to groom behind him and provide quality depth is a move that a team with very few holes like the Bucs can afford to make.

Add another member to the “from a small school to the Tampa Bay Buccaneers offensive line” club.  This was a case of the best player available for me, as Aaron Stinnie’s commendable performance in the absence of Alex Cappa proved the Bucs were not short of capable offensive lineman. However, Ryan Jensen, Cappa, and Stinnie are all unrestricted free agents in 2022. Meinerz could be a tremendous contingency plan. He’s a tough, nasty run blocker, and was lauded for his pass blocking work at the Senior Bowl.

I had my eye on Mills as a possible backup with higher upside long-term, who some have projected as high as a late first round pick. That said, when I had the chance to take him at the end of the third, I was thrilled.  Mills is 6-foot-4 and has a big arm that can make the deep throws in a Bruce Arians offense.

If he can learn the intricacies of the pro game, he has the physical skills to thrive in the league.  And hey, who better to learn from than the greatest to ever play the game?

6-foot-0, a 4.34 40 yard dash, and oozing with length and athleticism. There’s a ton of upside for a player like Joseph, who played outside and in the slot at Kentucky. Positional flexibility and athleticism to grow into an impact player are things to consider when you take a chance on guys in the later rounds, and Joseph checks a ton of boxes here. Pro Football Network draft analyst Tony Pauline had Joseph as his 37th best overall player earlier this month. I’ll gladly take him at 145 overall. 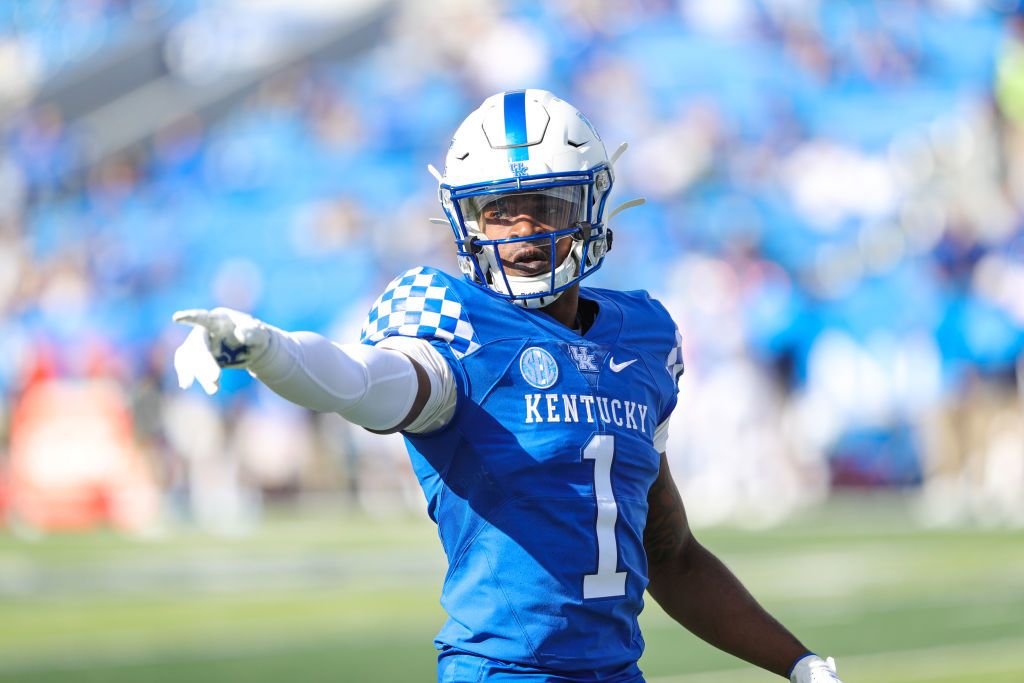 Having loaded up on depth, it’s time to find some playmakers, and the 5-foot-9, 170-pound Darden fits that bill. The speedy slot receiver hauled in 31 receiving touchdowns over the last 2 years, with 19 coming last season. He posted a stat line of 74-1190-19 for the Mean Green in 2020. He also returns punts, turning in a highlight reel 81-yard punt return touchdown last year as well, so he brings an additional aspect to the table to help his chances of sticking on an NFL roster. It also makes sense for the Bucs to pick a receiver in this draft since they don’t know what will happen with Antonio Brown.

Williams, Jr. provides a big play threat in the running game as well as reliable hands in the passing game. He translates to a third down back rather than a between the tackles, early down player. That said, he translates into one that can make plays and contribute to the offense. Playoff Lenny and Gio Bernard may not be here beyond 2021 and the Bucs know what they have in the passing game in Ronald Jones (who also is a UFA after 2021). As such, there’s at least a feasible opportunity for a player like Williams, Jr. on this team.

The 6-foot-2, 213-pound safety more than held his own at January’s Senior Bowl. He was named the top safety by his offensive counterparts, where he showed a coverage ability against his peers that matched a physicality in run support. He also returned kickoffs over his last two seasons for an average of 26.1- and 29.5-yards per return. Having not played since 2019 is a mild concern, but, again, he seemed to not miss a step in Mobile. This late in the draft, I’m willing to roll the dice on upside.

I was down to Bradley-King and Coastal Carolina’s Tarron Jackson here, but I ended up going with Bradley-King based on a stronger overall Pro Day performance.  At 6-foot-3, 252-pounds, he’s a touch underweight to move inside and hold any position other than playing on the edge, but he has enough room to be able to move into that, if need be.  I’m banking on him using his longer frame and developing on the outside anyways as a rusher. It’s worth taking a flier to see if you can untap the pass rushing potential.

What do y’all think of this first -and final- Bucs mock draft? Let us know in the comments below!