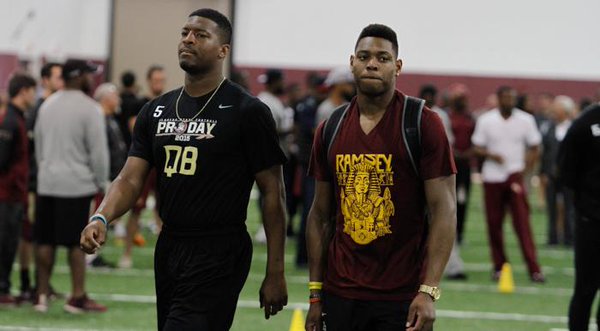 Jameis Winston wants his former teammate, Jalen Ramsey, to come to Tampa so badly he’s even willing to take a pay cut. Winston contacted the Buccaneers GM Jason Licht and told him, flat out, he wanted Ramsey and was willing to give up money in order to persuade the GM. Winston said that Ramsey is an incredible player and will make a major impact on the NFL. “We definitely have the best player in the world in Jalen Ramsey. People talk about his position. But Jalen is the best cornerback, safety. I will take a pay cut to play with him again.” Not unless Tampa can find a way to trade up to get him. It is highly unlikely that Ramsey will fall to Tampa at No.9, but Jameis still has high hopes and continues to give high praises to his former FSU teammate.