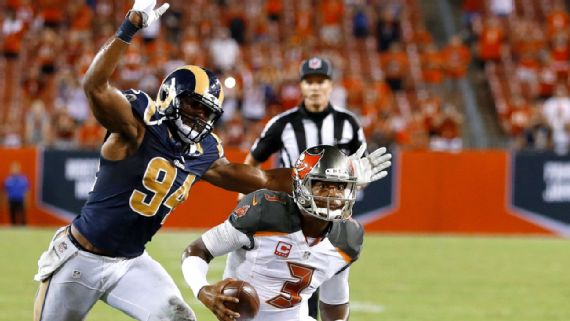 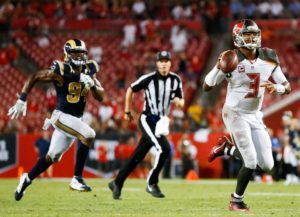 Tampa played well out of the gate and was able to build a 20-10 lead towards the end of the first half. However, the turnover problems that have hurt the Bucs this year came back to haunt them and lead to a 37-32 loss to the Rams.

Tampa was able to come out early and get two Rams turnovers and turn them into touchdowns, including a Kwon Alexander interception and return to get the Bucs to within one at 7-6. Then Lavonte David forced a fumble and Chris Conte return lead to another touchdown and Tampa looked good leading by 10 towards halftime. The turnover battle would go the Rams way the rest of the game starting with a Jameis Winston interception that leads to a touchdown before the half. The pass to Charles Sims was caught but a well-timed hit caused the ball to go loose and be intercepted by former Buc Mark Barron. Tampa took a three-point lead into halftime, but a poor start to the second half put the Bucs in a hole they could not come out of.

The second half started badly as both teams struggled offensively, the Bucs got into field goal range however Roberto Aguayo had a bad day and missed the 43-yard attempt.  This along with a missed PAT will continue to create the debate that the Bucs misfired on the second round draft pick.  After this miss, the Rams went down the field and were able to score on a one-yard touchdown run by Todd Gurley.

After falling behind by four, the Bucs got the ball back and were moving down the field well and looked like they may retake the lead. On a third and six, Winston fumbled as he was trying to throw and the ball was picked up and ran back 77 yards by Ethan Westbrooks for a touchdown.  This gave the Rams their biggest lead of the game at 31-20, the Bucs would fight back and get a touchdown as Cameron Brate got his second touchdown reception and the Bucs were back in the game trailing 31-26.

One of the biggest plays of the game happened on the next Rams possession as on a third and 17 Case Keenum threw deep and Alterraun Verner was called for a pass interference penalty that gave the Rams a first down, an eventual 43-yard touchdown pass from Keenum to Tavon Austin gave the Rams a 37-26 lead.

Winston and the offense continued to fight and Mike Evans came down with a 7-yard touchdown reception that got the game back to within five. Tampa would get the ball back and drive the length of the field, however time expired as Winston held onto the ball for too long and was taken down at the five-yard line. The Bucs lost a close game where turnovers and penalties proved to be too much to overtake.

Winston had a huge day as he had to throw the ball 58 times to keep the Bucs in the game.  He completed 36 of those passes and had three touchdowns and one interception. The 405 yards are a career high and he threw 10 of those completions to Mike Evans for 132 yards. The two of them are going to be a threat to defenses around the league for years to come. This is a game where they lost a ten point lead and if the Bucs could have held onto the ball and played more disciplined and penalty-free defense they should be looking for a win instead of a deflating and disappointing loss.