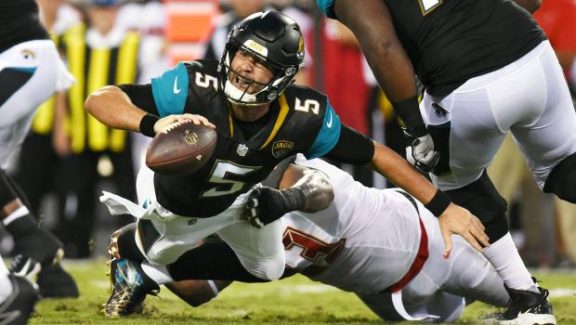 This year the Buccaneers wanted their Defensive Line to be bigger and faster. So to get bigger the Buccaneers brought in Big man Chris Baker and drafted Stevie Tu’ikolovatu. Adding 300 pounder Baker helps McCoy out by allowing Baker to take some of the double team and McCoy can use his get off speed to blow right by opponents Offensive Line. If you look at the stats of the first two pre-season games, they might not seem great but it’s all the pressure they are putting on the opposing offensives that are really scaring coaches!

In the Buccaneers first pre-season game VS Bengals, Tampa had 2 sacks by Kendell Beckwith and Sterling Baily. Noah Spence, Robert McClain, Riley Bullough, all had one tackle for loss. In pre-season week two VS the Jaguars, Lavonte David, and Adarius Glanton each had a sack. Glanton, David, and Beckwith all had two tackles for loss while Clinton McDonald had one tackle for a loss. The Buccaneers pass rush was getting to the Jags QB’s so fast that they were having to throw quick short passes hoping for a missed tackle to get the first down.

The Buccaneers defense was best in the NFL last year on third downs (34.4%) due to the fact of their defensive pass rush. The Buccaneers have high hopes for their second-year man Noah Spence. Last year he finished with 5.5 sacks and all of his teammates believe he can triple that number this year. On Saturday one of the greatest pass rushers in Buccaneers history, Simeon Rice, visited the Buccaneers practice. Noah Spence and Ryan Russell spent extra time after Saturdays practice learning from the 3 time Pro bowler about how they could ” tighten and tweak” their game to be better.

This whole team is BIG, FAST, and NASTY! We have one of the deepest defensive lines we have had in years! The Buccaneers have many players that want to be a great pass rusher! As Rice said, “You search for it long enough, you will find what is going to make you great!” These guys are looking for it, the Buccaneers hope they find it! With our secondary locking down receivers, the D-line is going to have a FIELD DAY with opposing offensive lines! Buccaneers defense is going to be TOP-5 this year!