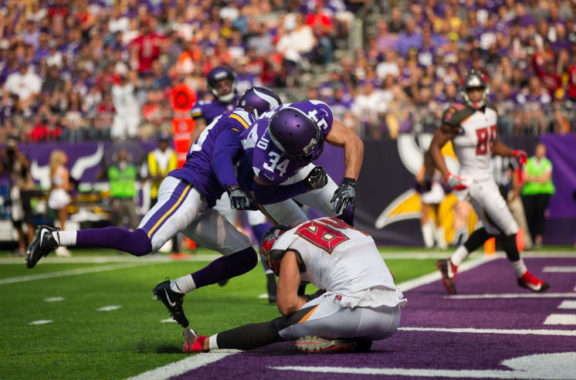 Coach Koetter said that an official admitted to him during the game on Sunday, that he missed the illegal hit on Cameron Brate.

Cameron Brate took a hit to the back of the head by Vikings safety, Andrew Sendejo, as he was catching a touchdown pass. However, there was no flag thrown on the play, since the official did not see it live, but admitted his mistake when he saw the stadium video board replay.

“Yes, it should have been a penalty, and the official told me afterwards that he just flat missed it and he saw it on the replay,” Koetter said, via the Tampa Bay Times. “I appreciate his honesty. I was asking him about it. It looked like it to everybody that was watching it, and of course, Cam thought it was. The official came right over and said he missed it when he saw it on the replay.”

Luckily Brate was not injured by the hit, and did follow through with the catch. However, if the officials would have made the right call, it would have resulted in a 15-yard penalty on the ensuing kickoff for the Vikings, as well as a possible fine for the Vikings player.