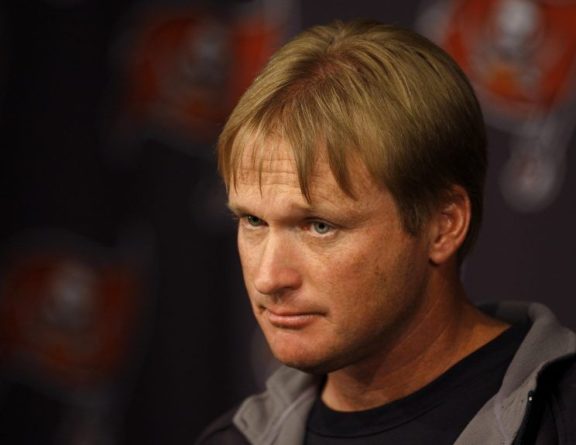 Many readers will be used to my statistical analysis of the Buccaneers and trying to put those stats into focus. Many times I’ve mentioned that Gruden won 57 against 55 defeats and I’ll again qualify that number. In Coach Gruden’s last season the whole team was hit by a bombshell that Coach Kiffin would be stepping down after the season as they were sitting at 9-3 and looked to be again running away with the NFC South crown. Without that gut punch, it’s highly likely that the team would have continued their assault on the postseason and who knows what would happen next?

The current problem is that with our present Head Coach, Dirk Koetter is that he is exactly as advertised. One good year and the downward spiral continues. If Coach Koetter is still at the helm of the good ship Tampa Bay Buccaneers we can expect more of the same.

However, it seems that people in the know are not happy to see that trend continue and will be making a push to bring Gruden back on board. At the moment this roster is loaded with talent and is at times showing flashes DESPITE Koetter. What is becoming a recurring theme is that the Glazer’s were expecting the Bucs to build on last year and are very disappointed with another top 10 draft pick.

Imagine if you will the available talent on this roster teamed up with a coach who will demand excellence and accountability from his players. This guy has spent 10 years evaluating talent and examining all 32 teams. For me, it’s a big vote yes for Coach Jon Gruden. Many fans will be clamoring for his return to actually steady a ship and sail us toward the playoffs and beyond. It’s also interesting to note that Gruden and the Glazer’s seem to have buried any bad feelings that may have been present.

Is a Christmas miracle in the works at One Buc Place? I certainly hope so.