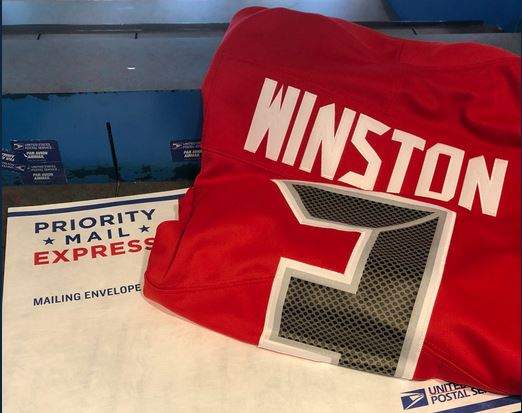 John Schuzer, a longtime Buccaneers fan since 1976 and season ticket holder, posted to Twitter recently with photos of his #3 jersey being packed up to ship back to the team. He captioned the post with,  “In good conscience I can no longer wear my @Jaboowins @Buccaneers jersey. I’m sending it back for you to donate or whatever you want. As a season ticket holder since 2007, I’m embarrassed & disappointed by this scandal. GoBucs 2018! @gregauman @TampaBayTre” 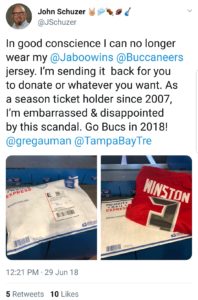 This comes after the NFL handed down a 3 game suspension to Winston for violating the league’s personal conduct policy,  after a lengthy investigation into allegations that he inappropriately groped an Uber driver in March of 2016.

In an article by Tampa Bay Times writer, Greg Auman, Schuzer says that he initially defended Winston after the allegations and thought the lack of evidence in the case did not warrant a suspension, “I was quite an advocate.” he said. Also adding, “without evidence, how can you suspend someone?”

It was not until after he read the NFL statement that stated, “the investigation had concluded that Winston violated the Personal Conduct Policy by touching the driver in an inappropriate and sexual manner without her consent”, along with Winston’s apology, in which Winston said, “I apologize to the Uber driver for the position I put you in.”, that Schuzer changed his stance and decided to return the jersey, rather than destroy it.

“That was the breaking point. I just didn’t find it sincere.” Schuzer said via Tampa Bay Times. “You create more chaos by giving a half-hearted apology than by giving none at all.” he added.

Schuzer has no plans to give up his season passes and looks forward to attending games as much as possible and says he’s still a Bucs fan. “I’m going to support this team 110%. But it’s going to be hard for me to cheer him, to have that on my shoulders. It doesn’t feel right. If that was my sister or Mother in that car; it’s just a bad message we are sending.” he said, according to Greg Auman.