It’s no secret the Tampa Bay Buccaneers will have some salary cap issues this offseason, but there are ways for the Buccaneers to make some noise in free agency while still keeping a solid core intact. Several players who signed big contracts in 2018 did not live up to expectations in Tampa. The Buccaneers can save some money by making big on players who underperformed. The extra cap space will allow the Bucs to make a run at some free agents to fill the holes on the roster.

This type of free agent player can talk and negotiate without any type of restriction from their current team.

These types of free agent players can talk and negotiate with any team they choose, but their current team can match the offer that said player receives. This is also where a team can place a draft pick tender on this player. If signed, the current team would receive a draft pick in exchange for the player.

These players are those who have played less than two full seasons in the NFL, but their contracts have expired. These players do not have the ability to talk and negotiate with other teams unless their current team chooses not to place a tender on them. If there are ERFA players on any current roster and they receive a tender, they will be back the following season with their current team.

With that understood, let’s take a look at how the above situations apply to the Buccaneers.

There are several players who signed with the Buccaneers in 2018. Defensive end Vinny Curry is one of those players who could find himself released from the team prior to the start of the 2019 league year. This would mean that his five million guarantee for 2019 would be added back to the Buccaneers’ salary cap. The Bucs would need to cut him prior to March 17th, 2019. 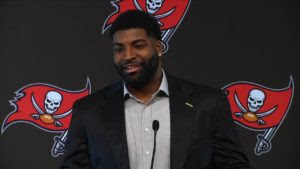 Vinny Curry started seven games for the Buccaneers in 2018, only registering two and a half sacks and five tackles for loss. I do not see Curry returning to Tampa in 2019. With his of lack of production and the salary cap hit, he could be looking for a new team in 2019. 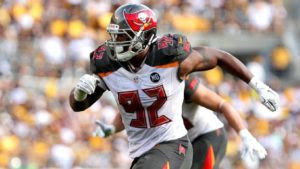 William Gholston is another player who could see himself not back in Tampa in 2019. Gholston’s one sack and two starts at defensive tackle won’t be enough to keep him with the Bucs in 2019. The Bucs could use the $3.75 million towards a player who will fit Todd Bowles’ defense.

Add defensive end Mitch Unrein to that list and his $3.75 million for 2019. Unrein was sidelined and eventually placed on injured reserve before the season began.

The last player I’ll list here is offensive guard Caleb Benenoch. For many reasons, and to not beat a dead horse, Benenoch has to be off the Buccaneers’ 2019 roster. Benenoch would cause the Bucs to take on $63,297 in dead cap while freeing Tampa of his $2.1 million contract.

*Wide receiver Desean Jackson is not listed due to Head Coach Bruce Arians wanting Jackson back in 2019. His $10 million salary could also be used to keep fellow wideout Adam Humphries on the roster.

Unrestricted Free Agents Who Will Not Be Back in 2019

Restricted Free Agents Who Will Not Be Back in 2019

Make no mistake, the Bucs don’t have much money to spend this offseason. There are several players who either need a new deal, a restructured deal, or a franchise tag to give them a one-year “prove it” contract. 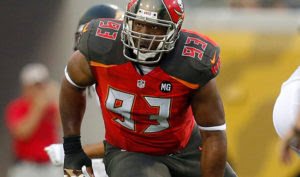 The first player who comes to mind is defensive tackle Gerald McCoy. McCoy is due a hefty $13 million in 2019, but with a restructure to his contract, the Buccaneers could keep him. Even with the amount of hate he receives from fans and media alike, McCoy is still a player opposing teams game plan for. If McCoy can make a deal for half of what he’s owed in 2019, then the Bucs will have more breathing room and would feel better keeping the veteran on the team. 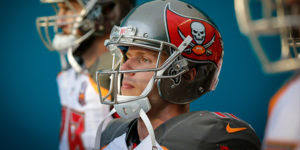 Wide receiver Adam Humphries is a must, in my opinion. His chemistry with quarterback Jameis Winston is second only to Mike Evans’, and his reliability is second to none. As I mentioned earlier, Jackson’s salary could be used to keep Humphries a Buccaneer. Although Humphries is a restricted free agent, the Bucs should make sure he is a Buc in 2019.

Kwon Alexander was almost guaranteed a new deal for 2019 before he tore his ACL against the Cleveland Browns. Alexander is a cornerstone on this team but does have areas of his game that need to be addressed. A big extension doesn’t seem likely for Alexander in 2019, but a one-year deal makes sense.

Alexander will become an unrestricted free agent and may draw interest from other teams willing to deal him a larger contract. If this were to happen, the Buccaneers should receive a compensatory draft selection in 2020. 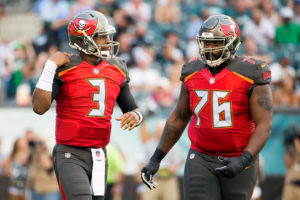 Donovan Smith hasn’t necessarily been that blindside protector he was drafted to be, but he would become the number one free agent offensive tackle in the NFL if the Buccaneers do not bring him back. The reason he stays in Tampa is simple. Good left tackles are hard to find in free agency and especially the drafts. Smith may not have been great all the time, but he will be way less of a liability than some other player, whether they’re from the draft or another team. With the new coaching staff in place, Smith could blossom into one of the league’s best left tackles.

As free agency starts and the 2019 NFL Draft gets closer, this list could change, and it most likely will. This is by no means a complete list of players the Bucs should retain and let loose, but the offseason can be very fluid.