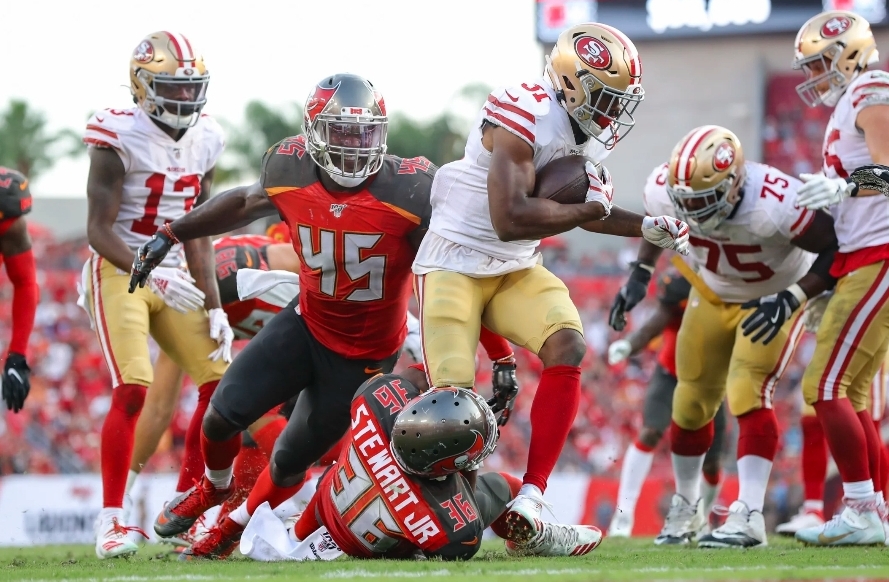 There was a possibility on Saturday that Devin White could miss his first regular-season game with the flu. Tampa Bay wanted to get a look at the Buccaneers’ new toy. Fortunately, #45 showed up on a day short of positive narrative and provided a spark.

White was battling the flu bug since last Sunday. He was listed on Saturday as questionable along with veteran receiver Mike Evans. It may have taken a village to get the #5 overall pick onto the field against the 49ers but the rookie did not disappoint.

Read Between The Lines

With five tackles and one assist, the stat line would not tell you the entire story. There were no interceptions, sacks, or fumbles recovered. The magic from the linebacking position comes from covering the field sideline to sideline, being at or near every tackle and being the quarterback of the defense. White is jumping right in.

It was obvious in the warm-up that this team is led by the defense. When Ndamukong Suh, Vita Vea, and White walked to the sideline together toward the end of warm-ups, every eye in Raymond James Stadium was fixed. White was all over the stadium. Literally. Tripping up running backs, flashing by on tackles. Footage of him prompting fans to get loud appears on the stadium video boards. Lavonte David is the veteran leader and White the student. Watching them at times yesterday felt a little like the early years of Shelton Quarles and Derrick Brooks.

Facts Are The Facts

Starting 0-1 on the season is a bitter pill to swallow. The 49ers defensive line is absolutely no joke. Kwon Alexander getting ejected may have inspired the visitors more than helping the home team. Questions we either don’t have an answer for or are not looking for an answer to.

Ryan Fitzpatrick made history by throwing for 400+ the three consecutive weeks of last season and put a Buccaneer jersey into Canton. Even as the offensive wave was cresting there was something about it that just didn’t feel “Tampa Bay”. Now, Todd Bowles defense seems to be retaking the identity a bit, even with Bruce Arians at the helm.

That fact may have Buccaneer fans looking at Winston’s stat line from opening weekend and giving thanks.