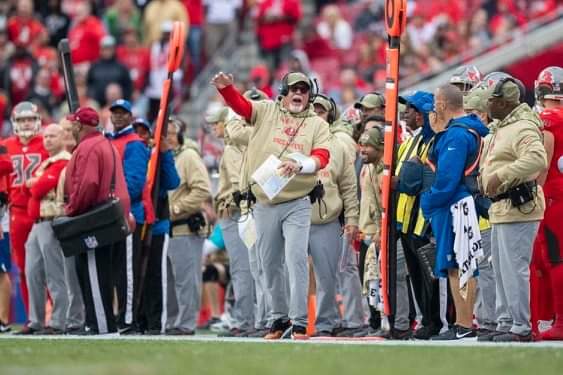 The Buccaneers fell to 3-7 after losing to the New Orleans Saints 34-17 Sunday afternoon. The offense turned the ball over, the defense struggled and the special teams, well… they actually played well.

It cant be easy to face the media after posting your seventh loss in 10 games. Arians opened the press conference with a statement.

“Too many mistakes to beat a good team and obviously when we drop passes and the quarterback gets an interception because we dropped the ball. Then, the one before the half was huge because we had a chance for a double score if we come out and score. Big, big, big plays. We didn’t get off the field defensively, they were over 54 percent on third down, which was huge. Their time of possession, I think they had the ball the entire first quarter, but we held them to six points. Then, the interception which wasn’t Jameis’ fault. Other than that it’s very disappointing because we had such a great week of practice, knew we were ready to play, it just still isn’t showing up quite enough on Sundays against good teams.”

Too many mistakes, it wasn’t his fault, had a good week of practice. Sounds familiar, doesn’t it? Now that the opening statement is out of the way, let the questions start!

“Yeah, we actually had Ryan Griffin ready. Winston said, ‘I can defend myself, I’m going back in,’ and he went back in.”

On Yet Another Unsuccessful Challenge

“I have no comments on officiating, they already wrote up the letter on my fine. You guys saw it, you write what you saw. I’m not saying anything about the officials.”

On Jamel Dean Not Getting Any Playing Time

“Yeah, we went with a different nickel package with Mike Edwards inside, we played a lot more zone. Dean was more in the man-to-man group. We’ll fix that, he needs to be out there on the field more.”

On The Line Of Scrimmage Battle

“I wouldn’t say offensively. We got out of the running game because of the score but I think they only had one sack. I don’t think our offensive line played poorly. Defensively, we were playing a lot of zone. A lot of two-deep zone. I thought we could stop the run, but Kamara is a heck of a back and we didn’t do a good enough job.”

“It’s hard to say. He’s a talented, talented guy but it’s not showing up on Sunday.”

On The Lack Of Balance In The Offense

“We ended up in a situation where we’re behind and we’re throwing the ball and we’re throwing it successfully, so it’s like, abort the running game. Dare, I still can’t believe that it wasn’t a touchdown there at the end for him. So, we had our best blitz pick-up guy in there. They had a bunch of exotic blitzes and he does the best job.”

“I would say he has 10 interceptions. Guys dropping balls and getting them to the other team, how many have we seen? I don’t count those. He got hit low in the ankle and that one flies out of his hand high. He probably should have come out of the game. He was probably too tough for his own good there.”

“It’s a medial (ankle ligament injury), we’ll see how bad it is tomorrow (Monday) and we’ll go from there.”

There is a lot to unpack here, honestly too much. The Buccaneers are on pace for their third 5-11 season. While I’ll never insinuate that I know more than Arians, what I do know is the excuses are starting to fall on deaf ears. Yes, it’s still early on in the process for this coaching staff, but something has to change. I don’t think releasing another DB is going to cut it this time.