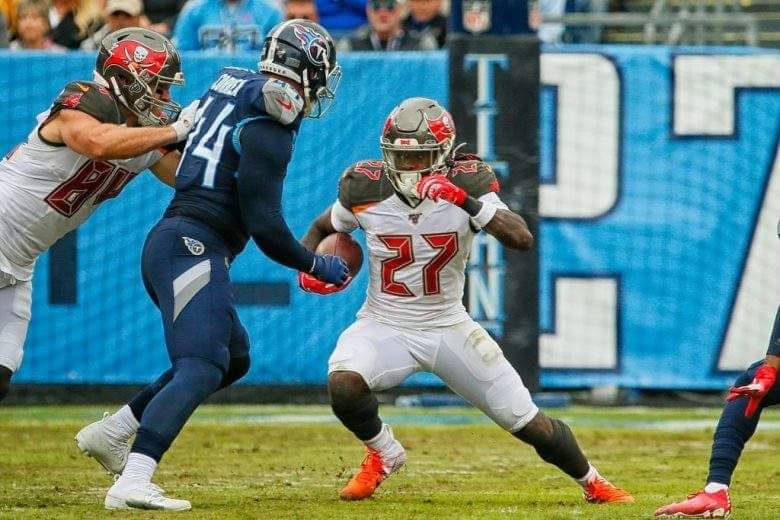 Since the day he took over as head coach of the Tampa Bay Buccaneers, Bruce Arians has stated his desire to have a balanced offense.

Emphasizing the importance of it on many occasions. However, in his first season at the helm, the Bucs struggled to consistently stick with the run game. They finished the season with a rushing attack ranked 29th in the league. Totaling 1,521 yards on 409 carries and scoring 15 touchdowns. In this review, we are going to take a look at how the Bucs running backs did in 2019.

The Rise Of Ronald Jones

Ronald Jones improved in a big way in his second year in the league. At the start of the season, the Bucs didn’t have a clear cut #1 guy, employing a ‘running back by committee’ strategy. Officially, Peyton Barber was listed as the team’s starter. Slowly Jones started to take more of the teams rushing attempts though and by week 9 he cracked the starting line up and never relinquished the spot.

He finished the year as the teams leading rusher. Tallying 724 yards, scoring 6 touchdowns and averaging 4.2 yards a carry. If the team stuck with the run game more, he likely would have had a chance to crack 1,000 yards. One of the knocks on him coming out of college and also in his first season with the Bucs was that he didn’t have good hands and he wasn’t on the field for very many 3rd downs because of it. Well, he got better there too. He caught 31 of 40 passes thrown his way for 309 yards. Jones best game of the year came in the regular-season finale vs. the Atlanta Falcons when he posted the first 100-yard rushing game of his career. What was so impressive about it is that he did so on just 11 carries.

While Jones was solidifying himself as the team’s top running back this season, there was a quiet battle going on for who would be the guy to share the load with him. Not just for this year, but potentially the future as well. Barber started the season as that guy and was even listed as the starter for the first 7 games. He finished the year second on the team in rushing yards (470) and tied Jones as the team leader in rushing touchdowns (6). As the season progressed though, his field time got smaller. The reason was the emergence of Jones as the #1 guy but also because the player I am about to mention stepped up earned a role in the offense.

Dare Ogunbowale wasn’t even supposed to make the team. He has only been playing running back for the two years after playing defensive back in college. But he was very impressive in preseason both on offense and special teams and earned a roster spot. Ogunbowale proved himself to be the best pass blocker at the position as well as the best route runner and that’s why he became the team’s best 3rd down option. He finished the season with 35 receptions and 286 yards. If continues to progress, he could have a roster spot in Tampa for years to come.

I think in year two under Bruce Arians we are going to rushing numbers improve. The run game wasn’t bad this season, we just got away from it too much. There were games where the teams were either tied or within one score and they would keep passing the ball. There would a few plays where the run game was stuffed, so they seemingly gave up on it. Or the passing game was working so well that they just stuck with it. Whatever the reason was, I predict that in 2020 Arians puts his foot down and he and Leftwich are more committed to getting the run game going each week. If they do, we will be a harder team to beat.