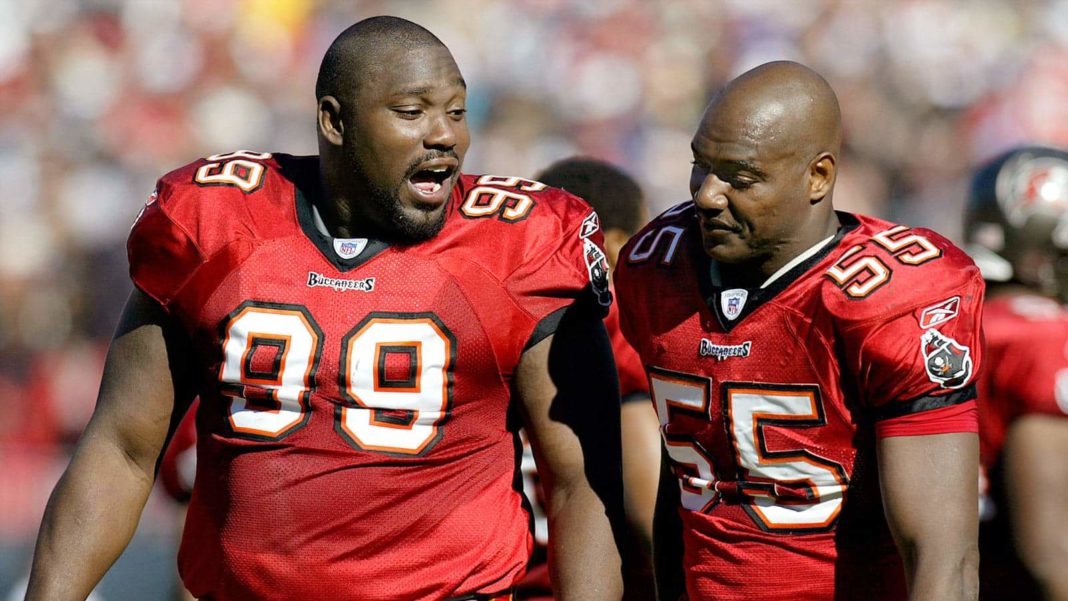 Trending is what the 1999 Tampa Bay Buccaneers were. The defensive scheme was so iconic that the NFL added the “Tampa 2” to its vocabulary. In Tony Dungy’s fourth season, the future Hall of Fame coach had a team made in his image. A smart, passionate, unrelenting style of swagger that had Buccaneers fans everywhere taking notice. It was a new day in Tampa Bay.

Tampa Bay’s defense would only allow the New York Football Giants 91 yards passing and 28 yards rushing on the day. New York would have four first downs all afternoon. The Buccaneers, however, would have three Trent Dilfer interceptions. Two returned for touchdowns.

Tampa Bay’s defense started to find its footing, sacking rookie quarterback Donovan McNabb six times that afternoon. Two Dilfer touchdown passes and 150 yards on the ground would give Tampa Bay its first victory of the season.

This game was the prototypical recipe for the Buccaneers’ success under Dungy. The Buccaneers would hold future Hall of Fame running back Terrell Davis to 53 yards rushing. Mike Alstott would have 131 yards and one touchdown. The Buccaneers were up 13-10 at halftime and the score would finish that way 30 minutes later.

With the first NFC Central game of the year, the Minnesota Vikings got out to a 21-0 lead. The Buccaneers would hold Minnesota scoreless the rest of the way. With two minutes left, Dilfer underthrew Warrick Dunn at the Viking 10-yard line and the pass was intercepted. Tampa Bay would get the ball back and again drive deep into Minnesota territory. Time would run out on the Buccaneers that day.

Another divisional game, which took place on Sunday Night Football, would have the Buccaneers traveling to the not-yet-frozen tundra of Lambeau Field. Falling behind 10-0, the Tampa Bay would manage to tie it up at the half 13-13. Trailing 19-16 with less than two minutes to go, the A-Train Mike Alstott would put the Buccaneers up on a 22-yard touchdown run. Then Brett Favre would take the Pack 76 yards in six plays for a touchdown. The Buccaneers’ largest offensive production of the year would yield 23 points. The lesson here? Don’t give Brett Favre the ball back with time on the clock.

This week would see the Martin Gramatica versus Chris Boniol show. The best kicker in Buccaneers’ history against the current Buccaneers specialists coach. Trent Dilfer would receive some heckling from fans throughout the afternoon and miss two open receivers in the endzone. Derrick Brooks’ interception with 45 seconds left would be the difference.

Tampa Bay’s second nationally-televised game of the year, the “Halloween game” on Sunday night saw Trent Dilfer benched, Eric Zier in, and the Detriot Lions with a 17-3 lead in the third quarter. A Warrick Dunn touchdown would see the Buccaneers with 10 men on the field for the extra point. During the ensuing Buccaneers timeout, Detroit would throw the challenge flag. The touchdown was overturned and Mike Alstott fumbled on the next play at the 2-yard line.

At 3-4, Buccaneers fans were a bit perplexed, knowing how special this thing that was being built here was. There was still such optimism. The team itself liked to stay close, batten down the hatches, and win late. This had to be the plan.

Tampa Bay’s Start of Something Special

In a precursor to a divisional rivalry after NFC divisional alignment two years later, Trent Dilfer would return as starting quarterback and throw for three touchdowns. Mike Alstott would add another behind 117 yards rushing.

With six turnovers on the day, the Buccaneers offense was swinging on par. Fortunately, so was the Buccaneers’ defense. The Kansas City Chiefs would drive late with Hardy Nickerson intercepting Elvis Grbac to seal the win.

Another late close game, the Buccaneers were down 10-9 in the last minute. Martin Gramatica’s fourth field goal of the day was for 53 yards, which would give the team the lead. Donnie Abraham would add a pick-six off of Atlanta Falcons’ quarterback Chris Chandler for good measure.

Two games over .500 and the Buccaneers were on a West Coast swing. Traveling to the other side of the country was historically hard on Tampa. Tied 3-3, Trent Dilfer suffered a broken clavicle. Shaun King was forced in at quarterback and would throw a touchdown to lead the team to victory.

Shaun King would get his first start against Minnesota. The Buccaneers were on a four-game winning streak and playing their third nationally-televised game of the season.

With another Donnie Abraham interception, this one thrown by Jeff George, would be returned for a touchdown. The Buccaneers would win their fifth game in a row while also ending the Vikings’ five-game winning streak.

After the loss to the Lions back on Halloween, the Buccaneers would win the rematch at Raymond James Stadium. Shaun King passed for 297 yards and threw two touchdowns, completing the team’s first six-game winning streak in Buccaneers’ history. The win would also give Tampa Bay sole possession of first place in the NFC Central.

To forever be known as “The Egg Bowl”, the Buccaneers went out to California and laid a huge goose egg. Shaun King had a rookie day with one interception, a fumble returned for a touchdown and sacked four times that would ultimately lead to the Oakland Raiders’ 21-0 lead at halftime. The team played their flattest game in the Tony Dungy era on this day.

Most of the starters were pulled in the second half to fight another day.

Three Martin Gramatica field goals had Tampa down 10-9 at halftime. Mike Alstott would have two fourth-quarter touchdowns to carry the team to victory.

With the NFC Central Division title on the line and the last game of the season, Tampa Bay would go on and throw one touchdown pass and an Alstott rushing touchdown. A stout Buccaneers defense would lift the team to its first NFC Central title in 18 years and only the third title in team history.

End of the Marathon, Beginning of the Sprint

Tampa Bay’s 11-5 record earned them a bye week from the first round of the playoffs. Stalwart left tackle and Buccaneers’ future Ring Of Honor member Paul Gruber broke his leg in the season finale and would miss the postseason (it would be his last career game).

Tampa Bay had made it back to the dance. A new century had started as 1999 turned to 2000. Anything seemed possible. The table was set and the playoffs were coming to dinner.