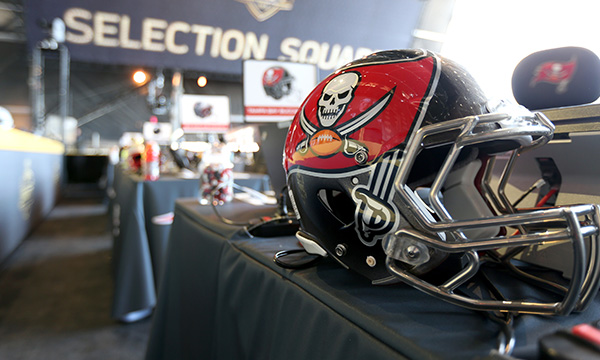 The Tampa Bay Buccaneers have made almost all the moves they can make in free agency. The defensive front returns, a new quarterback is in place and the cap space is thin. Next, the team looks to the draft to continue to improve this team.

The Tampa Bay Buccaneers currently hold seven picks in the 2020 NFL Draft. They own an extra fourth-round pick due to compensatory rules. Secondly, the Buccaneers traded a seventh-round selection as well as wide receiver DeSean Jackson to Philadelphia in exchange for a 2019 sixth-round selection. That 2019 pick ended up being Scotty Miller.

With the cap almost spent, the Buccaneers look much the same way they did last year. They changed quarterbacks to Tom Brady and added a potential steal of a right tackle with Joe Haeg. The defense remains mostly intact with the only significant departure being Carl Nassib. The largest loss on the offensive side of the ball is Breshad Perriman, who has moved North to the New York Jets. He was too expensive to retain. So moving forward the team must become creative in the draft.

Let’s assume the Buccaneers are on the clock at 14. Unfortunately, the offensive tackles have had a run and leave the Buccaneers with a big board that does not look to have the players they want for the cost of a 14th overall selection. They will then must find a willing partner with whom to trade. Looking through the first round, one team, in particular, stands out to me as a team that can benefit from moving up.

With two first-round draft picks and a large number of needs, the Vikings can be a willing partner. Here’s why and the selling point. The Vikings traded away Stefon Diggs and Laquon Treadwell signed in the NFC South with the Falcons. This leaves a glaring hole on their roster to play opposite of Adam Thielen.

This draft is loaded with talent at wide receiver and the Vikings could find a solid one at the 22nd or 25th pick in the first round. So why move up? It’s a draft big board philosophy of going out and getting “your guy” as the general manager. If the Vikings are really high on a particular wideout, the chances of them drafting them at 14 are far more reasonable then hoping the draft him at 22 or 25.

At the 14th pick, there may only be one wide receiver and/or corner taken. Remember this scenario started off with a run on offensive tackles at the beginning of the round. The 14th overall pick can then become more enticing to the Vikings as they can then select one of the wide receivers and/or corners they covet. Furthermore, the teams between the 14th pick and the Vikings selection at 22 are full of rosters in need of a corner or wide receiver. This may increase Minnesota’s urgency to move up and their willingness to trade.

Behind the Buccaneers at 15 the Broncos need a wide receiver and a cornerback.  The 16th pick is currently owned by the Falcons, who are in the market for a corner. Much like Atlanta, the Cowboys at 17 need a corner. The same can be said about the Raiders, Jaguars, and Eagles. All in need of a corner. Additionally, and further reducing the Viking’s chances of grabbing one of the front office’s favorite targets, the Jaguars and Raiders both need a wide receiver as well.

For minute lets pretend this scenario plays out. There is a run on tackles leaving Tampa Bay scratching their head and the only wideouts and corners off of the board are Jeffery Okudah and Jerry Jeudy. The phone rings and the Buccaneers are willing to trade with the Vikings. In order to move up, one could see a reasonable trade being the Vikings 22nd overall and their 26th in the second round (58th overall). This is a fair and equitable trade that both teams can benefit from.

Now, I am not proposing a trade back in the first round. I am only pointing out that there is a chance someone could be willing to add to the Buccaneers draft stock. Doing so could further the team’s ability to improve this roster and fill multiple holes.

Picking 22nd, Tampa Bay can still land a starting tackle. Josh Jones of Houston is an intriguing possible pick at this spot in the draft. As we know Jason Licht likes to move around on draft day so could this trade happen? We will soon find out.