J.J. Watt should be a  lock for the Defensive Player of the Year award. But then again, the way the NFL has been all over the place, this season, there’s no telling what’s going to happen. J.J is not on my favorite team, nor is the Texans a team I could consider liking. But J.J. Watt would have my vote.

“In yesterday’s win over the Saints, Watt logged two sacks and two tackles for loss and was hitting Drew Brees as he passed all day. The Texans’ 24-6 win was the first time the Saints have ever failed to score a touchdown in any game with Brees as their quarterback. Watt now leads the league with 13.5 sacks, and he has 70.5 sacks in his 75 career games. Since sacks became an official statistic in 1982, only Reggie White has reached 70 sacks faster.” 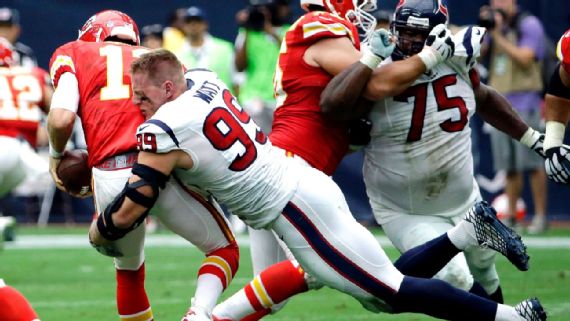