Bucs Report
Home Players And Rumors Mike Evans and Jameis Winston are working on their Chemistry. 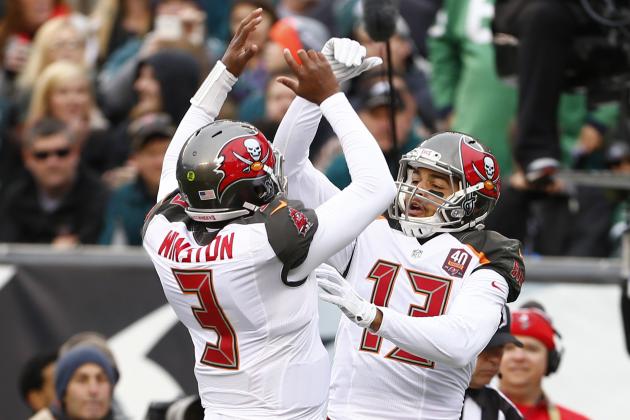 Mike Evans led the NFL in dropped passes last season, but he has been putting in extra work, with quarterback Jameis Winston to strengthen their on-field relationship. “We’ve been hanging out more. We’re both busy guys, but we find time to hang out and throw when we can.” Evans continued to say that he agrees with his head coach in saying that he and Jameis’ chemistry was a little off last year. Evans takes most of the responsibility for that and feels it will not be a problem, in 2016.

Koetter said he is confident that both Evans and Winston will improve to accomplish more in this upcoming season. Koetter went on to say that competitiveness will help to strengthen their connection and help it to reach another level. “The better those two guys play and the better those two guys execute, the better of our football team will be. They’re not blind to that. Even though statistically speaking, both of those guys had pretty decent seasons last year, the bottom line is still wins in the NFL. For us to win, Jameis and Mike have to become a more lethal combination, and I am quite confident that they will.”

It sounds like Coach Koetter is cooking up something special in Tampa and I hope it tastes as good as it smells. It is so refreshing to have a coach again who sees the team for what it is, and what it needs to be, rather than making constant statements like, “We had a good week of practice.”