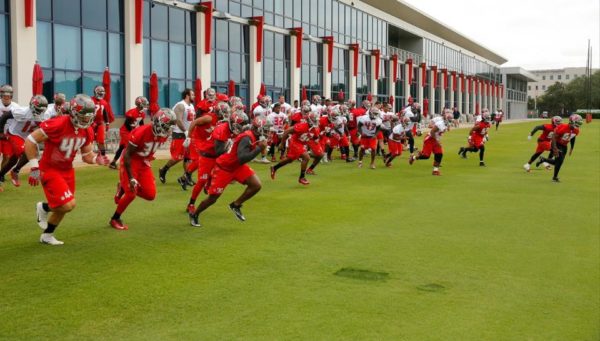 Devante Bond is back. Bond sat out all last year with an injury but has returned and is eyeing the strong side linebacker position. With Daryl Smith gone, the Bucs will have to fill that void and right now, Bond is the guy. He has been taking first team reps and with Kendell Beckwith still recovering from and ACL injury, it seems Bond will take the starting role with ease.

Ryan Fitzpatrick stepped on the field for the first time as Buc. Fitzpatrick has been the topic of much discussion and some only see his flaws, but never see any of the good he has done. Last season, there were many reasons to why he performed poorly, but those are now in the past and this is a different team. Fitzpatrick slides right into this offensive scheme with his veteran skill set and knowledge of the game. Whether he gets to see any actual playing time during this regular season or not, just having him around is beneficial.

J.R. Sweezy stepped on the field for the first time as Buc. Sweezy missed all last season with a back injury and fans were in an uproar. Many were calling him one of the worst offseason moves Tampa has made even before he had a chance. Well, now he is back and has the chance to shut those mouths. Running with the first team offense during the first day of OTAs is already showing signs that the moves made on the line might just work. Both of the tackles positions were, of course, locked up by their previous owners Smith and Dotson, with Marpet moving to center and Pamphile playing that Left guard position, Tampa’s line might just be the brick wall Jameis Winston can rely on.

Roberto Aguayo and Nick Folk Kick start the competition. Well, it didn’t go well for Aguayo, especially when now is the time he needs everything to go perfectly. Although it was only the first day of OTAs and there is plenty of camp left, Nick Folk has already started putting his foot into is craft. Yesterday’s kicks were attempted on a much narrower set of goal posts, 8.5 feet across to be exact, as opposed to the regulation width of 18.5. but that did not stop Nick Folk from going a perfect 4 for 4 from 30, 35, and 40 yards out. Aguayo was not so lucky as he missed all but his first attempt.

DeSean Jackson wears No.1 on the practice field. Of course, we know he isn’t No.1 and will wear No. 11 during the season, and considering Mike Evans wasn’t at OTAs on Tuesday, I believe No.1 was a fitting number. He surely was number one out there. One thing that is for certain is that Jackson has speed and like Koetter says, “Speed Kills,” and with his addition, it’s more than certain that Mike Evans will kill during games as the secondary will have their hands completely full trying to cover DeSean Jackson. This will make for one exciting offense this season.

Jacquies Smith was sidelined for the first day of OTAs and both Noah Spence/ Robert Ayers, were not able to practice.