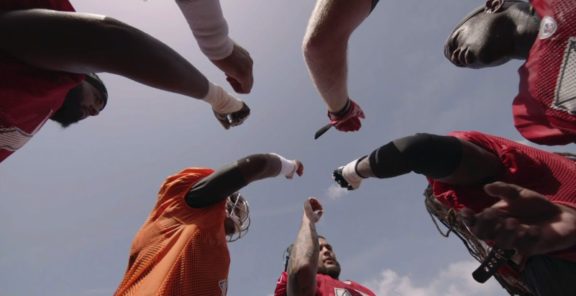 On Tuesday’s 2nd episode of Hard Knocks, we saw a little more of Jameis Winston’s leadership skills with his team. We saw his pre-game rituals and how he interacts with each of them.

He has a knack for knowing when the team or individual teammates need an extra boost of confidence. Before the game against the Bengals, he says to his teammates, “I know a lot of people out here tonight waiting for their moment. I know there’s a lot of people in red waiting on that one moment to show what you’re about.”

Also adding, “I ain’t gonna be able to sleep tonight if I don’t seize that one opportunity I get tonight at 7:30 against the Cincinnati Bengals. We only get one, don’t take it for granted, men.”

There’s even a moment when he and J.R. Sweezy say “I love you” to each other.

In, what I think was his strongest display of leadership during the episode is when he walks over to James Stone and Jarvis Harrison, who he sees laughing about Ryan Griffin’s shoulder injury, telling them, “I’m happy y’all are having fun, but Ryan just hurt his shoulder, so keep having fun.” Which wiped the smirks off their faces.

It’s no secret that he is a strong leader, but seeing the interaction between him and his teammates was pretty awesome.