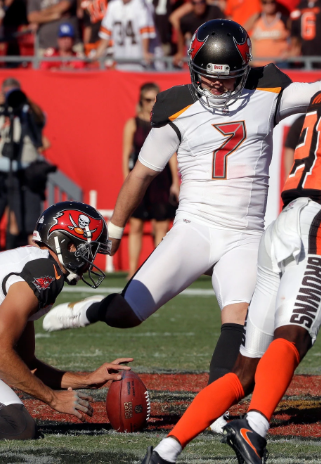 Kickers aren’t supposed to miss extra points!  Extra points aren’t supposed to cost a team the game.  Yet here we were, the 2nd week in a row where a missed extra point had a direct impact on the result of a game.  Last week, a missed extra point, caused a 2 pt conversion later in the game to fail.  One was an attempt to make up for the other.  Instead of driving into FG range late in the game for the win, the Bucs were down by 4, and came up short attempting to score a TD.  After another missed PAT (point after touchdown) yesterday,  and a missed field goal as time expired, it seemed as though the Bucs would be hosting some kickers this week, looking for Cantanzaro’s replacement.  Then, “The Kick” happened.

For all the frustration we have had with the kicking game over the last 3 years, at times it has been td to watch.  The close losses, the bad draft pick, even watching former Buc kickers having success on other teams, we just wanted this problem to go away.  Tampa Bay is ready to officially “not” having a kicking issue any more.  We want a kicker with a rocket leg, that can boot touchbacks on kickoffs, and make field goals at 80%+.  Must be 100% on extra points.  The good news is that Chandler Cantanzaro is THAT kicker. Despite his inconsistencies as of late.

Now once again, everybody, cue sigh…