With all the excitement and chatter surrounding the new look Buccaneers this year, one can simply get caught up in the euphoria of a new season. After the glee and expectations have settled, reality sets in and paints a slightly uglier picture. The truth is there’s more holes in the Bucs roster than a block of Swiss.

Not to worry though! Help is on the way in the form of a jolly, glasses wearing, Kangol hat trendsetting, golf-cart driving head coach. With all the talk of a lackluster defensive line and recent injuries, Bruce Arians has had to answer his fair share of questions from concerned reporters. The 2-time AP Coach of the Year, however, seems less worried on the matter. Arians had this to say earlier this months about his team’s defensive line woes (via Buccaneers),

“It’s easy,” Arians said about why he’s not panicking about the defensive line in May. “When we get to training camp, we will have the guys that we want in there. When I was in Arizona, every year that last week we would always add the missing piece…”

How Will Arians Address Team Needs?

Did you hear that? Bruce has heard the concerns and is already on it! But what exactly could it mean? A trade in the works? Salary dumps? Who knows at this point. Just leave it Arians to know what’s best for the team and rest assured our D-line will be primed and ready come September 8th when the Bucs square off against the 49ers (and former Buc Kwon Alexander) at home.

With that being said let’s take a look at some potential defensive players on the market who could help out the Bucs come Week 1: 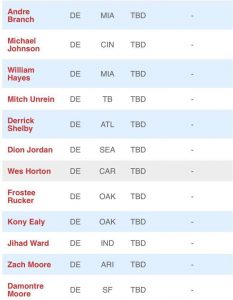 With many more to be added to this list come preseason with notable veterans headed towards becoming cap casualties, who would you like to see Arians bring in to help bolster this Bucs roster?