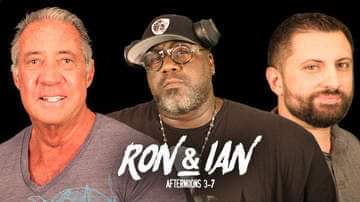 There are things in this world that are easy to figure out. Will it rain today? Is global warming a thing? The square root of Pi. Then, there are those things that are both beyond explanation and maybe, reprehensible.

On Thursday afternoon, local sports radio WDAE hosts Ron Diaz and Ian Beckles promoted a “stunt” via Twitter (see here). If you noticed this link has since been deleted, but here is a screenshot of the tweet: 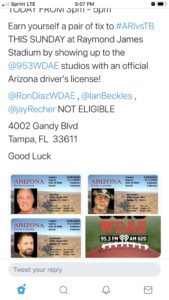 At about 6 p.m., the WDAE Twitter handle tweeted the tweet below, attempting to give the tickets away to veterans. Keep in mind Veterans Day is Monday. This would’ve been a better look for the radio station if they had started with this giveaway to begin with.

One can only assume this was a half-hearted attempt at ratings, but it felt more like a slap in the face to local Buccaneer fans. A promotion to give away a set number of tickets to Sunday’s home matchup against the Arizona Cardinals, in which the home team hasn’t played in since late September, had quick backfire live on air from concerning Tampa fans. But to pile on by offering free tickets to those that can provide an Arizona driver’s license was a “low blow” to locals.

I’m not one to make ultimate observations on what other good people do to put dinner on the table. We are all squirrels trying to get a nut. I fault nobody for shaking the status quo once in a while. Keeps things fresh.

It becomes an issue when the stunt appears short on good intentions for fans of the home team, that’s when you call it.

The definition of “clickbait” is; content whose main purpose is to attract attention and encourage visitors to click on a link to a particular web page. In today’s vernacular, the term is also applied to foolish stunts. These people make their living covering Tampa Bay sports. The difference here is the fine line between radio shenanigans, and seemingly, disrespect for the fans.

As you get older in the tooth, you start to take things a little more personal. Nobody refilled my beverage. The pizza wasn’t here in 30 minutes.

Nobody messes with the Buccaneers.

Could the Buccaneers Bring Back Adam Humphries?

Bucs UK Podcast: The Man Behind the Halftime Show

How The Buccaneers Can Open Cap Space

Could the Buccaneers Bring Back Adam Humphries?

Tanner Suarez - February 26, 2021
0
Adam Humphries was released from the Tennessee Titans on Thursday, February 25th. Humphries was owed $4.5 million by the Titans this year and is...

Bucs UK Podcast: The Man Behind the Halftime Show

Bucs Report Staff - February 26, 2021
0
Bucs UK Podcast  On this episode of the Bucs UK Podcast, we have something different for you. We...

How The Buccaneers Can Open Cap Space

Bucs Report Staff - February 25, 2021
0
Written: Michael SeDoris   In my first mock draft, I have the Buccaneers trading out of the 32nd pick with the Jets. In the trade, the...

Joshua Cole-Allen - February 24, 2021
0
Buccaneers Pro Bowl edge rusher Jason Pierre-Paul revealed today on his Instagram story that he is getting surgery on his left knee. Pierre-Paul said he...
Load more