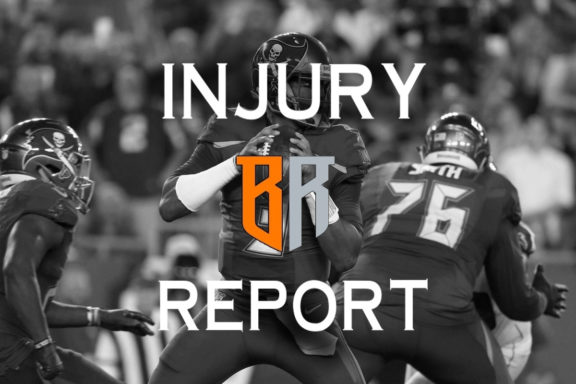 CB Carlton Davis had missed the past few weeks of football. He did return to practice last week, but his KNEE INJURY kept him LIMITED. That continued on Thursday.

T Demar Dotson had been dealing with a HAMSTRING ISSUE, over the past few weeks, his injury kept him from practice for most of last week. Wednesday, he was LIMITED IN PRACTICE with a SHOULDER and a KNEE INJURY. He was Limited again on Thursday.

WR DeSean Jackson is still out with THUMB INJURY. DID NOT PRACTICE Wednesday or Thursday.

S Isaiah Johnson is still dealing with a CONCUSSION. He missed last week’s practice and was OUT, last week, against the Saints. He missed Wednesday’s practice. Johnson RETURNED TO PRACTICE, Thursday, but was LIMITED.

DE Jason Pierre-Paul was LIMITED, in Wednesday’s practice, with an ongoing KNEE and HIP INJURY. He DID NOT PRACTICE on Thursday.

WR John Brown – DID NOT PARTICIPATE – NOT INJURY RELATED