Bucs Report
Home Players And Rumors Steve Smith Sr.: Winston is not the QB of the future for... 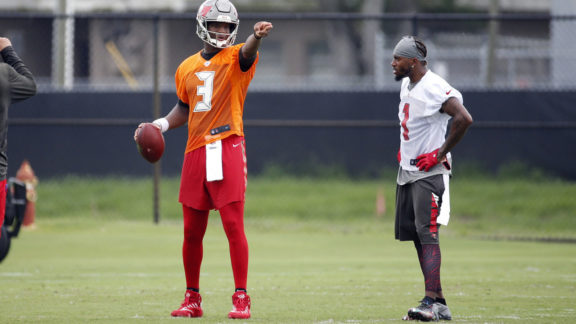 The Tampa Buccaneers have firmly re-established their belief that Jameis Winston is their QB of the future after HC Bruce Arians declared him as ‘his guy’ from the start. Many people, in the media and fans across Tampa Bay, believe that if anyone can get Winston to perfect his craft it would be the quarterback whisperer himself, Bruce Arians. Don’t count Steve Smith Sr. from the NFL Network in that group of believers though.

On Good Morning Football this week he went off on the young franchise QB stating that Winston should be to blame for the failed DeSean Jackson experiment and his probable departure. During the show he went on saying,

“There is a significant difference in DeSean Jackson’s numbers when Jameis Winston is playing… Bruce Arians is a fantastic offensive minded coach, but you can’t squeeze apple juice out of that lemon. It just ain’t happening. DeSean is gone.”

It is true that Jackson’s stats have suffered since his move to Tampa Bay. And his only bright spot with the Bucs was during a few game stint where he was one of backup QB Ryan Fitpatrick’s top targets. Before he signed with the Buccaneers, he had 1,005 yards receiving with 4 TD’s with the Redskins in 2016. These past two seasons he has yet to reach that benchmark, and a major factor contributing to that is because the Bucs have extreme depth at wide receiver. Not to mention, the Bucs already had a solid #1 receiver in Mike Evans before Jackson arrived in Tampa Bay. As a result, he was naturally forced to share targets.

For example, during the first 8 years of Jackson’s career he averaged 111 targets per season. While during his time in Tampa Bay, he has averaged only 82 targets per season; which ultimately comes down to just a couple less targets per game. That tells just a portion of the story though.

Smith was then asked if whether or not he believes Jameis Winston is the QB of the future in Tampa Bay. Smith responded,

“This is my job and I’ll be here next week. Hell no I don’t think [he’s] the quarterback of the future.”

Steve Smith Sr.’s reason for saying as much is simple, and it comes down to the decision-making of Jameis Winston. Especially when the game is on the line. Smith used an example that there were designed plays for Jackson, but Winston ultimately looked the other way. That hasn’t seemed to sit well with Jackson, and ultimately seemed to drive a wedge between them both. Which was evident by their lack of chemistry on the field for the last two seasons.

Steve Smith Sr. is obviously not a Jameis Winston believer based on the body of work that he has seen thus far from him, but is it completely justified? Or is it more predicated on his bias because of his relatability to another high-profile receiver not all too dissimilar to himself?

Let us know your thoughts in the comments below!