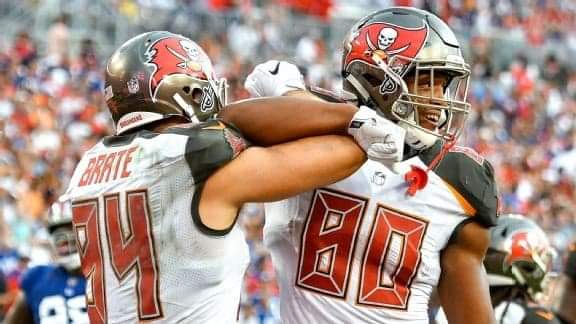 I think we can all agree that 2019 appeared to be a down year for the Tampa Bay Buccaneers tight ends group. There were relatively high expectations for the group in year one of the Bruce Arians era in Tampa Bay, but those goals never really flourished.

Most who were familiar with the type of offense Arians runs knew that he loves the deep ball, especially coming off play action. That’s not necessarily an offensive attack that would indicate big numbers coming the way of the tight ends. But someone like O.J Howard has the size and speed to win a one on one matchup against a linebacker or saftey. Arians in his earliest days with the team said that this team’s offensive (and defensive) philosophy would revolve around what the players do best. So what gives? Why did the receivers thrive all season while the tight ends were largely quiet? Let’s dive in and look at the season this group had.

The 2019 season was a strange one for Howard. I, along with others, expected that this was going to be his big year. The one where Howard would have his coming out party and establish himself as one of the very best in the league.

In his first 2 seasons, we saw glimpses of his ability to be that type of player, and it was exciting to watch. Big, fast and explosive. You don’t generally hear all three of those words associated with a tight end.

Howard caught 34 passes for 459 yards and just 1 touchdown. He also only went over 50 yards receiving in three games. By comparison, he surpassed or tied all of those numbers in just 10 games in 2018.

It’s hard to identify any single reason for his lack of production in the passing game. It’s likely a combination of things. The two games he missed this year were due to a hamstring issue and that could have had a lingering effect. It could also be that he was being asked to block in the passing game, something that Howard struggles with.

All in all, the expected ceiling for Howard in 2019 never really was touched and left a lot of analysts and fans alike wondering what went wrong

We didn’t see a whole lot of fan-favorite Cameron Brate on the field this season. Somehow, despite that, he still found a way to finish the season with more receptions (36) and touchdowns (4) than any other tight end on the roster. Also factor in that he only saw over 50% of the team’s offensive snaps in three games this season. The rest of the games he struggled to see the field even 40% of the time. Most weeks playing between 30-40% of the team’s snaps. Go figure then that he had some of his stronger games of the year in those 3 weeks and his best game of 2019 came in week 11 when the Bucs lost to the Saints 17-34 at Raymond James Stadium.

Can We Expect More Production In 2020?

I would say I’m optimistic that overall we will see more production from the tight end position next year. However, because of the season Howard had and the fact that Arians and Leftwich’s offense didn’t put two tight ends on the field at the same time very often unless there was a run play called. I could see trade rumors popping up this offseason regarding him. Especially as we close in on the draft. I could also see Brate’s name come up as well, or for the Bucs to consider releasing him so that they can begin to clear some cap space for free agency. The coaching staff seems to like Tanner Hudson and may view him as a younger, cheaper alternative to Brate. Personally I would like to see them both back in Tampa in 2020 but we’ll have to see what happens.