Bucs Report
Home Players And Rumors Are O.J. Howard and Cameron Brate the best tight-end duo in the... 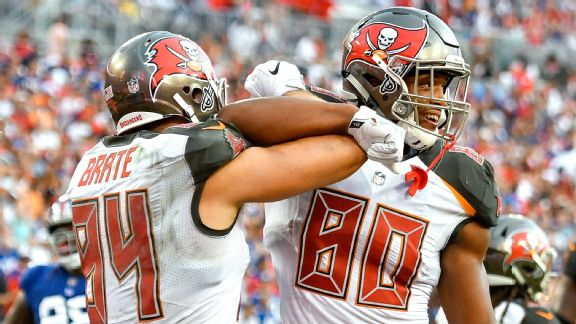 Are O.J. Howard and Cameron Brate the best tight-end duo in the league?

Both players have different skill sets, so let’s break down each player.

Let’s start with incumbent starter Cameron Brate. Now, we all know, Brate couldn’t block a flea, but defenses must always account for where he is on the field at all times due to his uncanny route running and catching abilities, especially in the red zone. He is perhaps famous Jameis Winston’s favorite go to receiver when in trouble, even more so then Evans.

On the other hand, rookie O.J. Howard is a great run blocker. He showed that when he played for the Alabama Crimson Tide. Although he hasn’t produced much offensively this season, he had a huge, break out game last Sunday against the Bills in Buffalo. If you look at his Combine results, he ran a 4.51 forty-yard dash, which is actually faster than some wide receivers ran the same. He has shown that he can make big plays in the biggest of games, having played a key role in two national championship games when he played in college. At 6’6 and 250 pounds, he is a mismatch for any DB attempting to cover him. He should develop into a dynamic red zone threat.

So are they the best TE duo in the league?? I would say so, and as Howard continues to develop it’s only going to get better.